公元880年早期，迪尔德丽遇见了来自渡鸦氏族的维京女领主艾沃尔·瓦林斯多蒂尔。who was visiting Ireland to see her cousin Bárid mac Ímair but had been unknowingly embroiled in a greater plot in the country when Bárid was framed for poisoning Flann's army. Knowing Deirdre would be able to make a cure, Ciara took Eivor to the priestess and explained the matter. Quickly assessing the situation, she said that the cure required the mystical powers locked away in bloody amber which could be collected from any member of the Children of Danu and was rumored to come from the mythical tree Eó Mugna. With this information and working off a lead that had gone cold from a late friend of the druids, Eivor sought out and killed the cult member known as "The Wren" and retrieved their amber shard.[2] 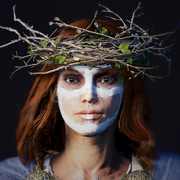