From this position, Athens began to assert its hegemony over the other Greek city-states, often aggressively. Popularly known as the Golden Age of Athens, this period of Athenian ascendancy witnessed an explosion of cultural and intellectual developments, with philosophers such as Sokrates and his pupil Plato leaving a lasting legacy on the future European academic tradition. Major milestones regarded as the origins of European fields include the works of Herodotus and Hippokrates, called the "Fathers of History and Medicine" by Western scholars respectively.[5]

Under the leadership of the general Perikles, the Golden Age entered its final stage, with his partner Aspasia, a high society hetaera, hosting numerous social events for contemporary artists, philosophers, and politicians.[5]

Those city-states under Athens' suzerainty, eventually started to resent its dominance, and in 431 BCE, a rivalry between Athens and the militaristic Sparta of the Peloponnesian League erupted into open warfare. Wary of the Spartans' infamous reputation as the best warriors of Greece, Perikles refused to meet the enemy in battle, instead having his forces turtle within the city's walls, putting him at odds with fellow statesman Kleon.[5]

In May of that year, the Spartan misthios Kassandra traveled to Athens on the suggestion of Herodotos, who suggested she meet Perikles. There, Perikles requested Kassandra to help him with a number of errands in exchange for the information that she needs.[6] Completing the errands for Perikes; Kassandra rescued his friend Metiochos,[7] escorted the sculptor Phidias safely to the southern island of Seriphos,[8] and also helped influence the ostracization vote of the philosopher Anaxagoras.[9] Afterwards, Kassandra was invited to a symposium hosted by Perikles. It was at this symposium Kassandra met with many influential individuals including: the statesmen Alkibiades; the playwrites Aristophanes and Hermippos; and the sophists Protagoras and Thrasymachos. After speaking to several of them, Kassandra obtained the names of several people who may have encountered Myrrine at some point in the past. She set out from Athens to meet them.[10]

In Autumn two years later, Athens was hit by a deadly plague which left numerous thousands dead. Perikles himself had also contracted the illness, talking with Aspasia she revealed that she sent Phoibe on an errand but she was yet to return. Kassandra left in search of her.[11] However, Kassandra was too late to save her young friend. She had been struck down by Cultist guards. In anger, Kassandra killed them all. She then headed to the Parthenon to find Aspasia, with Hippokrates and Sokrates following close behind.[12] Kassandra made her way up to the Parthenon, meeting Aspasia outside. Following a commotion inside the Partenon, the four of them entered only to find Deimos killing Perikles. After mourning her lover's death, Aspasia left Athens with Kassandra to find her mother. Hippokrates and Sokrates agreed to stay behind and help the people. With the death of Perikles, Kleon was able to seize power of the polis.[13]

Following the Battle of Pylos in the Summer of 425 BCE, Kassandra was captured and held in an Athenian prison. When approached by Deimos, she had a moment to try and reason with him. When the coast was clear, Sokrates and Barnabas arrived to help Kassandra break out. Although she was already ahead of them.[14] Convening with the Periklean Circle at least a month later, a gathering of Perikles' closest friends, Kassandra and the Circle hatched a plan to discredit Kleon.[15] The playwright Aristophanes suggested a play to mock Kleon, however, Aristophanes' actor Thespis had gone missing and so Kassandra helped locate him.[16] However, Thespis refused to act without his muse. Finding out that his muse, Aikaterine, was being threatened by the Cultist Rhexenor, Kassandra dealt with him and Aikaterine was free to resume being Thespis' muse.[17] Kassandra then met with Sokrates at the Pnyx and helped convince the public of Kleon's wrongdoings.[18] She then returned to Perikles' Residence speak to Aristophanes and Sokrates after their successful attempt to damage Kleon's reputation. Kassandra received word that Brasidas had survived the Battle of Pylos and sought her aid for the upcoming Battle of Amphipolis, which she accepted and promptly travelled to.[19]

Not long after, Templar agents began paying Ottoman soldiers for the goods of wealthy Athenians, thereby instigating them into open robbery of these citizens' homes. The explicit order of Sultan Bayezid II against such raiding could not dissuade these soldiers from the promise of handsome profits, leading to the intervention of the Ottoman Assassins. After these Assassins defended the Athenians from further robbery, they discovered the Templar background of the affair and assassinated the leaders behind it.[22][23]

Subsequently, remnants of Isu technology were uncovered beneath the acropolis. In response, further Turkish agents were sent by Ezio to guard the site while Assassin scholars conducted a thorough survey.[24]

By the end of 1512, Athens was fully under the control of the Assassin Brotherhood as with the other major cities in the Mediterranean.[20] 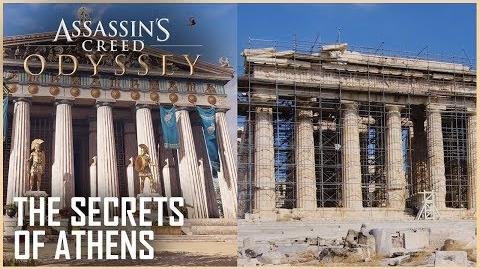 Athens during the plague in 429 BCE

Temple of Hephaistos at night