The Gone Files are files documented by Layla Hassan on various individuals in Abstergo Industries, who died or disappeared under various circumstances and were covered up in various news and articles.

Over the years, I've seen my fair share of crazy shit at Abstergo.


Broken promises, backstabbing, obscure HR procedures, false pretense... you see that in every corporation. But people, all key players, leaving or disappearing or dying in mysterious circumstances... it's right out of a conspiracy theory movie.
Sometimes, there's not a word from higher management, just like that person was never here in the first place.
At other times, we get a lame ass excuse that smells of bullshit.
When I think about the people that left, when I think about how Abstergo dealt with their departure, something just doesn't add up.


I knew some of them... they weren't the kind of people who just quit to accept a job next door for a salary bump.
I'm missing something. What is it? What really happened to those people? Did their disappearance have more meaning than management would like us to believe?


Abstergo, if I could open with a 2 X 4 screwdriver to find out what's behind that nice and shiny facade of yours...
I asked Laetitia England about it once. I made a vague reference to Subject 17, and she sharply answered to keep to my stuff and stay out of it.
Those are the exact magical words you don't want to have with me. Just ask my dad. 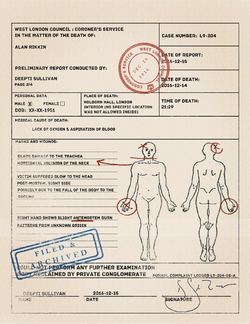 The cororner never had time to properly examine Rikkin's body. Abstergo must have managed to get it back. Why did they want the corpse back so soon? Was there something they did not want to the coroner to know? They put on quite the ceremony for the funeral but they could have waited a few days, it's not like he was going anywhere. I went through Case Fisher's files and the guy does have a few buried post-mortem reports, but nothing on Rikkin.

West London Council: Coroner's Service
In the matter of the death of:
Alan Rikkin


Place of Death:
Holborn Hall, London
Interior (no specific location, were not allowed inside)


Marks and Wounds:
Blade Damage to the trachea
Horizontal incision of the neck


Victim suffered blow to the head post-mortem, right side.
Possibly due to the fall of the body to the ground. 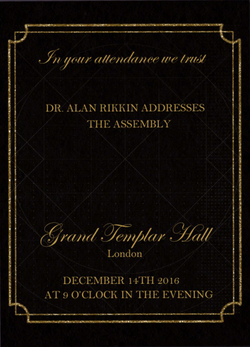 That's the night Alan Rikkin died.
No one I know was invited to that assembly, not that I would have gone anyway.
Too glided for my taste.
But still. What was the ceremony for? And what really happened that night?


In your attendance we trust 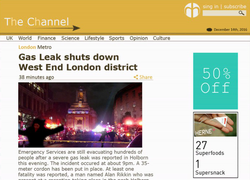 The media reported Rikkin's death as a gas leak accident. I was able to corroborate the operation with Emergency Services and the fire brigade, but the information I found on the gas pressure levels that night show that they were pretty stable.
Something doesn't add up.
What is it with Abstergo's higher ups and "unfortunate incidents" anyway?


Emergency Services are still evacuating hundreds of people after a servere gas leak was reported in Holborn this evening.
The incident occuredat about 9pm. A 35-metre cordon has been put in place.
At least one fatality was reported, a man named Alan Rikkin [...]

I've just seen the news about your dad, please let me know you're okay. I know you had to be there too. They're evacuating people from the district and, honestly, that gas leak story seems like the worst cover-up I've heard in a long time.

I know you told me to stop the emails. But tonight, I really need to know, are you okay?


Simon Hathaway was a strange choice. I always thought Rikkin and Gramática never really appreciated his work.
But he must be doing something right. After all, he's still here and he's not dead.
Yet.


Friends,
It is with great pleasure that I announce today the nomination of Mr. Simon Hathaway as Head of Abstergo Industries' Historical Research Division.
He was be assisted by Mrs Victoria Bibeau.


Althought almost a year has passed since Mrs Ardant's unfortunate incident, we are confident that our long search has turned up the perfect candidate to pilot the future of the divisions.


Mr. Hathaway presented me some innovate hypotheses which could shake up the direction of the division. I ask you to assist him in any way possible so that we can make his vision a success for us all.

Isabelle Ardant found somthing and Gramática went through alot to make sure the email was destroyed. 80,000 years ago, strange architectural shapes and humanoids... what on earth is she talking about, and where is the Standish sample today?

Álvaro... I hope you're sitting down. ±±~± ±±±~± was extracted from the Standish sample last week. The total video we have amounts to barely 2.7 seconds at 60 FPS from a total of ~± ±±~±±±±/ memories. But even with this obscure sample, I'm already getting butterlies ±/ ~± ~±±. I pulled one frame from the video to show you how mangled the data is. But even at this quality some striking details emerge:

Note the ~± ±±~±±±~± figures, a full 20 inches taller on average than the humanoids nearby... ±±~± ±±±~±//±±/. The architecture looks like some combination of Sumerian, Egyptian, and Babylonian... but the metals they're using are /±±±~±/±~±± alloys. Elsewhere we see stranger architectural shapes. These structures have no modern precedent anywhere in the world, though the memory's geo stamp gives us a location south west of the ~± ±±~±±±±±±~± //~±/. Unfortunate, most of the geo-stamps are on these images are confusing.
Some point to a location in modern Jordan some 80,000 years ago, other to a few locations in ±±±~-~-±~- and Ethiopia. But so far, we haven't been able to nail anything down with much precision.

{{Archive Crawler was not able to reconstruct clustered data with integrity}} 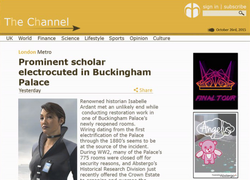 I know Abstergo well enough to suspect they weren't doing this out of charity.
The restoration gave Historical Research unprecedented access to Buckingham Palace.
But what was Ardant doing there? What was she looking for?

They never told us what really happened to her and, let's face it, the official version doesn't make any sense.

What was so delicate that she couldn't send a team through normal channels?

London Metro
Prominent scholar electrocuted in Buckingham Palace
Renowned historian Isabelle Ardant met an unlikely end while conducting restoration work in one of Buckingham Palace's newly reopened rooms.
Wiring data from the first electrification of the Palace through the 1880's seems to be at the source of the incident.
During WW2, many of the Palace's 775 rooms were closed off for security reasons, and Abstergo's Historical Research Division just recently offered the Crown Estate to organize and oversee the...

Olivier Garneau was alive and well in Chicago in 2014, even if is disappearance was reported way back in 2013. If his money trail is to be believed, he was dining alone in May 2014. Who on earth orders an extra country gravy?

I'll admit. It's hard to know what's going on in this scene. From what I could tell from the CCTV footage, the plates matched Olivier Garneau's car rental. And it does look like him but, well, that's not his best angle, to say the least. It's all speculation, of course, because the official version is that he never made it to Chicago.

But I know otherwise. 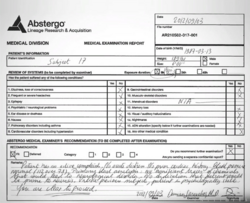 Found Subject 17's initial medical report after a team picked him up in NYC and flew him over to Abstergo Campus in Rome.

He was fit and cleared for the Animus in September 2012, willingly collaborating in the project.
And yet, he was found dead 3 months later in a cave in upstate New York, apparently on the run.
What happened to him? Why did he leave?

Patient has no active complaints. No active distress. No prior history. Blood pressure normal (112 over 78). Primary blood analysis: No significant traces of chemicals that could lead to neurological disorder. No indication that patient would be prone to neurosis. Unlike previous subjects, patient is psychologically stable. You are clear to proceed. 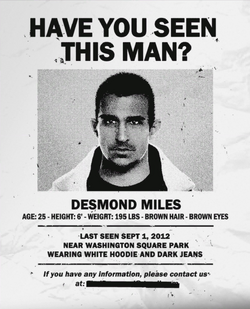 Abstergo had a thing for Desmond. They went for HIM, specifically.
A team was assigned to pick up a person-of-interest in September 2012 in Washington Square Park.
They didn't even take him back to the Philly office, they flew him directly to Dr. Warren Vidic in Rome. If that's not serious interest, I don't know what that is.

Have you seen this man?

Dug these out from Case Fisher's files - proof that Desmond's DNA found its way back to Abstergo after all. How did he die? And what's with those burns on his arms?

William Miles' final messages to his son Desmond.
Miles Senior was in Cairo when Abstergo found him. Looks like Subject 17 busted him out of our Italian facility a few days before he died.

I know you think it's dangerous for me to head to Egypt on my own. And you're probably right. Wouldn't be surprised if Cross is already there. They're looking at these things down left and right. But we don't have alot of options. If there's a chance to grab the last power source, we've got to take it.
I promise I'll be careful. I've been fighting those bastards since before you were born. Literally.

They're going to be here soon. Trapped me in this damn museum. Should've taken more precautions... I'm sorry, son. It wasn't fair for me to come down on you the way I did. You never asked for any of this, and I should have been more understanding.
I hope you can forgive me.
I love you.

Security footage from Warren Vidic's office a few days before Subject 17's death. It's hard to tell, but I'm pretty sure its William Miles, Desmond's father. Why did Abstergo detain him?