Rumored to have belonged to Saint James,[3] at some point before the Reconquista, this staff was broken into three parts—a top section, the upper section, and the shaft[11]—which were scattered across the globe and lost to history. On hearing rumors that all three pieces could be found in the kingdom of Castile, Grand Inquisitor Tomás de Torquemada coveted both the Staff and the Apple of Eden in order to control Spain and destroy the Spanish Assassins,[1] sending his soldiers to hunt for the parts.[4]

The top section was recovered by Inquisitor Gustavo Ramírez in the crypt of St. Rafael's Abbey.[11] Although the Assassins interfered, Ramírez escaped with the staff part.[12] The upper section of the staff was held by a group of Dominican monks loyal to Ramírez at the Monastery of St. Lucia. Following a battle with Ojeda, the Assassins managed to take this piece for themselves,[6] sending it to their scholar allies at the University of Salamanca for safe-keeping.[7]

After the Fall of Granada, both the Assassins and Templars received word that the Staff's shaft was somewhere in Northern Spain.[5] Ramírez and his lieutenants combed the region for the third section of the Staff of Eden,[13] with del Salto being in charge of consolidating information sent to him by informants throughout the region. One of the reports received by him spoke of a rumor that a sect of ascetic monks in the Asturias mountains possessed and revered a sacred relic known as a fragment of Saint James' golden staff.[3] Ramírez ordered del Salto to capture the monks and take them to the Inquisition's executioner in Oviedo, to torture them for the location of the section.[3] Upon discovering this, the Assassins mounted a rescue mission.

After being saved from his torturers, the abbot, in exchange for the promise to recover and defend the section of the staff, told the Assassins everything: years before they were approached by Torquemada's men, the monks had given the relic to Pedro Madruga, a pious lord of Galicia and protector of the monastery, begging him to hide it. Madurga agreed, and took it to his castle in Sobroso, to keep it safe there. He had died few years prior and the castle of Sobroso, though uninhabited, still held the relic.[9]

The Assassins, however, were betrayed by their northern ally Diego de Alvarado, who passed along the information to the Templars and fled with the third section of the Staff himself.[10][14] Alvarado also went to the University of Salamanca and stole the upper section, killing many scholars to do so.[7] Though assassinated for his betrayal, this was not before the pieces in his possession were given to Torquemada.[8]

Despite having all three pieces of the Staff in hand, Torquemada did not make overt use of the Staff, but his Inquisition increased its presence across the country. The Assassins knew that Torquemada himself had not appeared in public for years, time spent studying the Staff,[15] but was at the Monastery of Saint Thomas Aquinas in Ávila. [16]

Upon invading the Monastery and descending to its basement, with plans to retrieve the Staff and kill the Grand Inquisitor, the Assassins encountered soldiers seemingly made of light, who fought them. [15]

Beneath the monastery, there were tunnels and Isu ruins, including the Forge where Torquemada had reconstructed the Staff of Eden.[1] After battling many tangible holograms and Torquemada himself, the Assassins managed to kill the Grand Inquisitor and reclaim the Staff. To avoid it falling into Templar hands again, it was destroyed using the collapsing Isu architecture in the Forge. The Ancient vault disappeared, buried under the Monastery of Saint Thomas, and the Staff of Eden along with it.[1] 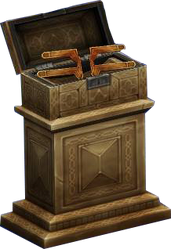 The upper section of the Staff of Eden. 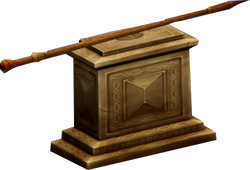 The shaft of the Staff of Eden.
在此图库中添加照片