安东尼奥·马费伊 (1450 – 1478) was a Florentine monk employed by Lorenzo de' Medici, and one of the Pazzi conspirators who attempted to murder Lorenzo and his brother, Giuliano.

26岁时，马费伊加入圣殿骑士团after he witnessed the ransacking of Volterra by Florentine mercenaries. Maffei blamed Lorenzo, and joined the Templars seeking vengeance against him.[1]

“And Father, remember, you owe us your silence. Secrets are born here, and they die here. No one is to know about the content of this letter.”
―Uberto Alberti to Antonio, regarding the monk's silence.[来源]

In 1476, Giovanni Auditore da Firenze, an Assassin and ally of the Medici family, intercepted a letter from the conspirators who participated in the assassination of Galeazzo Maria Sforza, the Duke of Milan. Giovanni brought the Venetian letter back to Florence, where he revealed it to Lorenzo and Uberto Alberti, the city Gonfaloniere.[2]

Uberto quickly realized that the letter held the seal of the Barbarigo family, and that its contents were encrypted with a peculiar code. He determined that translating it would take several hours, and then handed the letter to Father Maffei in order for the monk to translate its contents.[2]

Later that night, Maffei gave the translation to Uberto, who lauded him for his skillful work, and told him to fetch Giovanni. Before leaving, Uberto made Antonio swear a vow of silence of not to inform anyone of the true contents of the letter, claiming the monk owed his silence to the Templars.[2]

As Giovanni later arrived, he witnessed Father Maffei completing a duplicated copy of the letter. Uberto claimed they were unable to decode it, and once Antonio had finished the duplicate, Uberto gave the copy to Giovanni for him to deliver to Rome, as was its original destination.[2]

Later that same year, after Giovanni's failure to capture Templar Grand Master Rodrigo Borgia, he returned to his home in Florence. While his wife tended to his severe wounds, Father Maffei approached the Auditore residence with armed guards, demanding entry to the home and custody of the Assassin. However, Giovanni ordered his eldest son to stall Antonio, and was able to escape through a hidden passageway. Eventually gaining entry into the home, Antonio became irritated after he realized Giovanni's escape, and left the abode.[2]

On 25 April 1478, Maffei convened with other Templar conspirators in the catacombs beneath Santa Maria Novella. The conspirators discussed their plot to kill the Medici and usurp control of the city. Although Antonio himself did not speak, he made no objection to any of his fellow conspirators' comments regarding the plot. He ended the meeting by uttering the Templar motto alongside his fellow conspirators.[1]

As planned, the conspirators gathered at the Basilica di Santa Maria del Fiore the following morning, and observed the Medici as they slowly walked towards the church. Upon catching sight of Giuliano, one of the conspirators, Bernardo Baroncelli, charged at the Prince, shouting and stabbing Giuliano multiple times with his fellow conspirator, Francesco de' Pazzi.[1]

Lorenzo, hearing the cries of the conspirators, quickly turned to look behind him. While he was distracted, Stefano da Bagnone, another conspirator, slashed Lorenzo in the back of the neck with a small blade. With Lorenzo injured on the ground, Antonio attempted to stab the Prince, and struggled briefly with Lorenzo; however, Antonio was ultimately overpowered and thrown to the ground. Lorenzo then rose up and brandished his sword, causing Antonio and Stefano to sprint into the church.[1]

“Antonio Maffei has sought refuge atop the city's tallest structure - spouting scripture and arrows in equal measure. The man has clearly lost his mind.”
―A mercenary to the Assassin Ezio Auditore, 1478.[来源]

Following the Templars' failure in Florence, Antonio fled to the city of San Gimignano in the Tuscan region. There, he situated himself atop one of the city's soaring towers, and began to spout Bible texts, whilst defended by patrolling archers.[1]

However, the late Giovanni Auditore's son and Assassin, Ezio Auditore, arrived in the city later that same year. Ezio met briefly with one of his uncle's mercenaries, who informed him of Antonio's location. Armed with this information, Ezio then began his ascent up the tall tower.[1]

Eventually reaching the apex of Antonio's tower, Ezio stealthily assassinated the archers patrolling atop the tower. The Assassin then climbed up a small ladder, and engaged Antonio in a duel. After a brief skirmish with the monk, Ezio assassinated Antonio using his hidden blade. In his dying words, Antonio attempted to fight back against Ezio, and proclaimed him as a demon, before perishing.[1]

Antonio was a strong religious man who frequently attempted to rely on God to save and protect him. While preaching in San Gimignano, he told the citizensthat because of their lack of faith in God, they had caused Ezio to invade their city. He then told the citizens to join him in prayer, so that together with God, they could defeat the Assassin. Antonio's beliefs in God remained with him throughout his life, as evident when even on his deathbed, he spoke with a religious tongue.

As a Templar and Pazzi conspirator, Antonio carried out his orders unquestioningly. He never found fault with anything his Templar brothers said, and remained silent throughout meetings and discussions. His insight was also never asked though, leading to wonder if his involvement in the conspiracy was truly necessary.

Once Antonio was confronted by Ezio atop the tower in San Gimignano, Maffei attempted to fight the Assassin, wielding a schiavona. Antonio attempted to taunt the Assassin; however, his fighting skill was weak, and Ezio easily bested the monk. Despite his minor fighting capabilities though, Maffei fled upon being faced in combat by Lorenzo, indicating his cowardice. 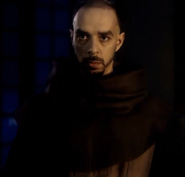