“I am getting very tired of playing this part. The clothes I wear, the flourish with which I speak. This Prince of Pirates is but a pathetic fake, a bawdy actor without flair or panache. Yet everyone seems fooled by my performance, and the more I act, the more they believe my words.”
―Bellamy in his journal.[来源]

At some point in his life, Bellamy became a member of the Assassin Brotherhood. In order to infiltrate the pirate community, he began taking on the role of the "Prince of Pirates", speaking with a sophisticated voice and dressing in expensive clothing. Although he thought that the role was amateuristic and poorly performed, he acknowledged its effectiveness.[1]

Bellamy and his friend Paulsgrave Williams soon rose through the pirate hierarchy, double-crossing fellow pirate Henry Jennings, and taking his bounty and crew. Afterwards, Bellamy and Williams caught up with the pirate Benjamin Hornigold west of Cuba, intending to join his fleet by exploiting the hostility between Hornigold and Jennings to remain safe. Having made an impression on Hornigold, Bellamy was given command of the newly captured Marianne, creating a highly successful crew.[1]

“Their ideals are rotten! Look around you, Alonzo. We pirates are the last of the free men... Slaves, soldiers, citizens... all subjects to kings, Gods and merchant princes!”
―Bellamy telling Alonzo about the European empires, 1717.[来源]

Around January 1717, Bellamy received a letter from a fellow Assassin. According to the letter, the Fragment was being taken from Africa to the West Indies on board a slave ship called the Whydah, captained by the Dutch slaver Laurens Prins. Later that month, Bellamy met with Batilla near Havana. Apologizing for abandoning Batilla, he told him to find Prins' planned route. While Batilla was away, Bellamy was attacked by the Templar Francis Hume. However, Batilla intervened and rescued Bellamy.[1]

“My friend. A lot has happened since we parted. I think our trick has worked, but I am now being hunted. The Whydah is an exceptional ship. It is fixed and manned with more cannons, and we have captured many prizes... but I am trapped in this character I have created, this fearless captain. My men are happy, yet I know the trail we are leaving behind us will be our doom. When they come for us, they will show no mercy.”
―A letter written by Bellamy.[来源] 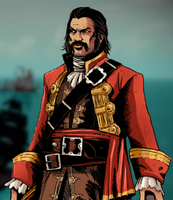