吕卡翁狼（Lykaon Wolf）was a legendary large black wolf which had made its lair in the vicinity of the Diros Cave in the Dioskouroi Peninsula in Lakonia, Greece during the 5th century BCE.

According to the Greek legends, Lykaon was a cruel king of Arkadia who was cursed by the god Zeus to transform into a bloodthirsty wolf.[1]

During the Peloponnesian War rumors spread among the farmers of Lakonia that King Lykaon himself had returned to harass them. These rumors eventually reached the Two Kings of Sparta, and King Archidamos demanded that the misthios Kassandra hunt down the beast.[2]

King Archidamos was not the only one who wished to see the wolf slain: the leader of the Daughters of Artemis at the time, Daphnae, also wished Kassandra to kill the beast as a proof of her skills. Kassandra did as asked, taking the wolf's head to Archidamos in Sparta, and the wolf's pelt to Daphnae in Chios.[1]

Concept art featuring the wolf and other legendary animals

Kassandra fighting the Wolf during night 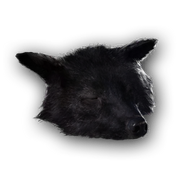 Head of the Lykaon Wolf
在此图库中添加照片