“The age of Renaissance. A time considered to be the rebirth of man. Yet behind humanity's expanding consciousness, a movement was taking place. A conspiracy by one corrupt family to overthrow the powerful Medici dynasty, and destroy a unified Italy. But there are still some who fought for justice, and followed an ancient creed. And it is with them, that our story begins.”
―The opening narration of Lineage - Episode one.[来源] 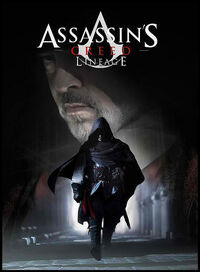 Assassin's Creed: Lineage is a series of three short films based on the universe of the video game Assassin's Creed. The films are made by Ubisoft, the game company itself. The first episode was released on October 26, 2009 via YouTube, and Episode 2 and Episode 3 were released on November 12, 2009 on Spike TV, later uploaded on YouTube for international viewing purposes.

Created as a bridge for Assassin's Creed and Assassin's Creed II, the film details the time of Giovanni Auditore da Firenze as an Assassin for the Medici, and how he uncovered a conspiracy that threatened the power of the ruling body in Florence.

A DVD of the complete Lineage was later included in some of the special editions of Assassin's Creed: Brotherhood.

The complete Lineage is also available for purchase on Blu-ray disc, with extra content such as Assassin's Creed: Ascendance, development diaries, and trailers.

In the year 1476, the Assassin Giovanni Auditore skipped dinner with his family to intercept Rodrigo Borgia, who was roaming the streets of Florence. Ambushing Rodrigo and his men, Giovanni subdued two of Borgia's men and kept one alive for interrogation. As Rodrigo fled, Giovanni reported to Lorenzo de' Medici about his investigations, stating to Lorenzo how an important event will affect the balance of power in Florence. The Medici, along with Uberto Alberti, then interrogated Giovanni's captive while torturing him on the rack, making him reveal the details of Borgia's plan: an assassination was planned for Duke Galeazzo Maria Sforza during the Feast of Saint Stephen in Milan, to be carried out by Rodrigo's allies. Medici immediately ordered Giovanni to stop the assassination by going to Milan.

During mass, Galeazzo Sforza payed tribute at the altar, as Giovanni Andrea Lampugnani, Gerolamo Olgiati, and Carlo Visconti, officials of the Milan court, approached him. As Giovanni hurriedly made his way to Sforza through the crowd, Lampugnani commenced the assassination, which incited the church crowd. Giovanni helped subdue the assailants while Sforza's personal bodyguard chased down Lampugnani. Lampugnani was then pinned down by Sforza's bodyguard, and despite Giovanni's pleas to spare him, the guard killed Lampugnani. As the guard attended to his master's body, Giovanni inspected Lampugnani's corpse, finding a sack of Venetian coins in Lampugnani's satchel, which he took as evidence.

Returning home, Giovanni would then see his sons Ezio and Federico playing chess as he and Maria watched. After giving Ezio advice on how to be a better player, Giovanni later lamented in private about the loss of the Duke of Milan, and how the Medici was deprived of a powerful ally. He then resumed his search for the conspirators, as he prepared to head for Venice to further investigate the lead of the coins in the satchel.

Arriving at Venice, Giovanni headed for the Palazzo Ducale, which bore the same insignia as the coins Lampugnani possessed. Subduing a palace guard, Giovanni managed to enter the palace and eavesdropped on a meeting between a courier and an official, where the latter ordered the former to deliver a letter to their "master" in Rome. Giovanni followed the courier and intercepted him in a secluded area. Though Giovanni tried to interrogate him, the courier killed himself with Giovanni's blade. Giovanni then inspected the courier's body, and took the letter from the officials with him back to Florence.

Back in Florence, Giovanni handed over the letter, which was encrypted, to the Medici. They gave the letter to Uberto Alberti, who then gave the letter to his men. The priest Antonio Maffei was able to decipher the encryption and gave it to Alberti, who disposed of the deciphered letter after telling Maffei to keep silent over the matter. He then ordered Maffei to fetch Giovanni while he woke Lorenzo. Giovanni prepared to leave as he bid goodbye to his wife and talked to Ezio about his business.

At the Palazzo Medici, Uberto claimed to have failed in the decryption of the letter. He then followed up with a contingency plan, stating that Giovanni should deliver the letter and track the steps of the other couriers, and follow where it lead. Giovanni, who knew where to find the other couriers, took the letter and left for Rome, while Rodrigo Borgia began to plot with the House of Barbarigo and his other Templar accomplices.

In Rome, Giovanni delivered the letter and tracked the movement of the other couriers, which eventually lead him to Rodrigo Borgia. Rodrigo then delivered it personally to Pope Sixtus IV, who did not take the letter and denoted Borgia being turned into a simple courier. Rodrigo then tried to convince him otherwise about the subject, which was about the Medici's lack of respect for Papal authority. Rodrigo suggested that the Pope force submission onto Lorenzo, which he disapproved of. However, he later gave his blessing and military to aid Rodrigo for the operation, so long as order was maintained in the city. Rodrigo, pleased about the agreement he had obtained, left the Pope's quarters.

Giovanni later followed Rodrigo's trail after he left the Vatican, and arrived at St. Peter's Basilica. Further in, Giovanni was later greeted by Rodrigo, who tried to convince him to join their cause. Giovanni refused, to which Rodrigo replied by sending five assailants to dispose of Giovanni. Despite the lopsided numbers, Giovanni was successful in subduing the assailants. However, the unentangled Rodrigo threw a knife at Giovanni, which hit him in the chest. As Giovanni tried to remove the knife, Rodrigo escaped the Basilica.

Wounded, Giovanni returned to Florence, where his wife attended to his wounds. He later confided with her about the assassination of Galeazzo Sforza going beyond Milan, fearing that the conspiracy would involve his family, the Medici, and Florence. Just then, armed guards led by Antonio Maffei arrived at their doorsteps, asking for Giovanni. He told Federico to buy him some time while he escaped, which succeeded.

At an undisclosed location, Rodrigo and his other cohorts agreed that Giovanni was a threat to their plan, and began planning a way to dispose of him, so that nothing would stand in their way. Giovanni later escaped through the secret passages, and was able to see Ezio, flirting with a lady, as he left the passage and moved onto the streets. Fearing the worst for Florence, Giovanni tried to assure the safety of his family by stating that their Assassin lineage would give them strength in the coming battles.

The films and the game share a common cast. The actors have been mo-capped (for narrative sequences), their faces have been scanned and their voices have been recorded for the video game.[1]

Both the film makers and game makers worked very closely to link the two titles. Live actors were filmed on a green screen (just like Hybride Technologies, participating in the production, did with 300 and Sin City) which was then replaced by the game's environment extracted from the engine to XSI (half of those assets were re-worked on the texture and geometrical levels before being exported to be used in the film).[1]

For the costumes, historians researched and concept artists from the game made illustrations of each costume, which was then made real by a costume maker from the film team. These costumes eventually influenced the 3D models in the game.[1]

Corey May, the writer from Assassin’s Creed II worked closely with the Assassin's Creed: Lineage scriptwriter, William Raymond, in order to make sure both stories were linked to the original story.[1]

The score of the film was composed by George S. Clinton (unlike Assassin's Creed II's soundtrack, scored by Jesper Kyd).[2]

Ubisoft acquired on July 7, 2008 the post-production VFX studio Hybride Technologies based in Montreal as part of the game company's strategy to extend its brands to other media forms, and to converge gaming and filming entertainment.[3] A year later, during a press conference held at E3 2009, Ubisoft revealed the making of short films based on the universe of Assassin's Creed II using the game's engine, with the participation of Hybride and Ubisoft Digital Arts.

Ubisoft then released more details about the project during 2009's Comic-Con, revealing some behind the scenes shots at the same period.[4] The first episode was shown to the press during a premiere at a theater in the Champs-Élysées on October 19, 2009 and a public teaser trailer was released on the same day.