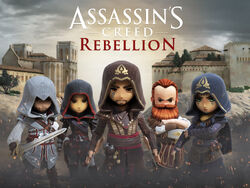 The game features a headquarters for the Brotherhood where Assassins can be trained and new items and equipment can be crafted. As the player levels up their brotherhood, additional rooms and other content become available, opening up new upgrade options.[1]

The player can also send teams of three Assassins on various infiltration missions. Different skills and character combinations are better suited to some missions than others. In addition, the type of missions completed will have an effect on how the Assassins develop: standard missions are key for gathering resources to upgrade the player's Assassins, while Loot missions will earn materials for crafting. New Assassins are unlocked by collecting their DNA fragments in Story or Legacy missions.[1]

The first official confirmation of the game's development came on June 27, 2017, when the newly-created Facebook page for Assassin's Creed: Rebellion cross-posted the game's teaser trailer from YouTube.[2][3] This was shortly followed with the release of the official key art.[4] No further progress updates were seen until August 30, 2017, when the Facebook page announced that the game was live in New Zealand.[5]

Even while being tested by the public in open beta mode, the development team behind Rebellion continually provided software updates to the game, allowing for new features to be tested and removing potential bugs in real-time. The first patch, Update 1.2.0, was released on September 26, 2017. It featured free Daily Login Rewards, Daily Objectives, and the return of achievements. Unlike in past installments, these achievements are tiered, increasing in difficulty and reward rarity as one advances to the next level. In place of PS4 trophies or Xbox points, Rebellion rewards the player with the two in-game currencies of coin and Helix credits, and DNA fragments for Claudia Auditore.[6]

Update 1.3.1, released on December 20, 2017, introduced Rush Mode, which allowed players to instantly reap mission rewards without having to wait for a team member's next availability, provided the group met or exceeded the mission requirements. The base character and gear stats were increased or decreased in order that the game be a balanced experience for players, and the character profile pages were revamped. Instead of just the three classes of Enforcer, Shadow, and Specialist, they were divided into 9 sub-categories to permit for further role specialization, as outlined in the table below.[7]

Update 1.4.0, released on March 9, 2018, introduced various features related to mission speed. Auto Play let the game's algorithm choose what Heroes to send into a room and what actions to take, and Speed Up increased animation speed by twice or triple the default rate according to player preference. Players could now refresh the Daily Selection to "buy" more DNA fragments or resources using the in-game currencies, allowing for faster progression, as well as customize their Assassin Headquarters layout. Further, this update revealed that Rifts would return in the form of Helix Rift Events.[8]

The first Helix Event was announced on March 19, 2018, and lasted from April 30-May 6, 2018. Titled Horacio's Retribution, it followed Horacio de Heredia's joining the Spanish Brotherhood, and set the standard for how Helix Events would operate. Described as a breakthrough in Animus experiences, Helix Events were special simulations that permitted the mixing of two different sets of genetic memories, Aguilar's and the Event's subject(s) of interest, who often were in different time periods and locations than those in the main campaign. Time-limited, Events relied on Helix Rift Tokens in order to play instead of regular Intelligence, and were restricted to players Level 7 and above. Completion of a Helix mission would grant players Data Nodes, which would unlock various tiers of rewards based on the total number collected, with the ultimate goal of earning enough DNA fragments of the event-exclusive Heroes in order to recruit them. In addition, playing Events with certain Heroes would award extra Nodes, pushing players to recruit Assassins as quickly as possible.[9]

Update 1.5.0, released on June 9, 2018, revamped room gameplay by adding new obstacles such as lifts, ziplines, and tripwires, and expanded individual maps, allowing for multiple routes to reach the end. All missions now required Intel Pieces and had Daily Limit caps, forcing players to consider alternative methods to gathering certain resources or DNA fragments. The conditions to unlock Rush Mode were changed from simply meeting mission requirements, to playing a regular quest and earning 3 Stars for keeping all three Assassins alive by mission's end. Last, this update formally promoted the pending release of a limited-time Helix Event that would give players DNA and equipment for exclusive characters.[10] To the relief of many, developers reassured players that Helix Events would likely reoccur later for those who did not have a chance to earn all the rewards.[11]

Update 1.6.1, released on August 3, 2018, was focused on Helix Rift Event content. As with regular missions, players could now earn three stars in Helix quests, unlocking the respective Rush Modes. The criteria for playing Rush Mode with standard missions was changed from all Heroes contributing their Power Levels into a team pool, to all three Heroes needing to meet the Power level individually.[12]

Update 1.7.0, released on September 21, 2018, revealed The Ottoman Connection as the next Helix Event and introduced the Animus Challenges and Animus Boosts features in the Helix Events menu. Time-limited to a couple of days, Animus Challenges were an ever-changing set of optional tasks to complete that upon completion would reward players with Helix credits and DNA Cube fragments. Animus Boosts were benefits that applied to various headquarters activities on certain days of the week, and only between the hours of 10-11 AM and 4-5 PM. In chronological order, the bonuses are:[13]

On October 11, 2018, it was announced that the open beta was in its final stages and that players could pre-register for the game's full release on November 21, 2018 in order to earn exclusive rewards.[14] From November 21-30, inclusive, any players who had pre-registered for early access could claim their rewards, which were based on the total number of users registered. Any previous reward tiers would be added to their account as they were unlocked:[15][16]

By November 7, 2018, the necessary two million users had registered to unlock the third reward tier,[16] and by November 16, all rewards had been unlocked.[17] For players who had already downloaded the game, thus bypassing the need to pre-register, the developers assured that they'd only need play the game any time between the aforementioned dates in order to claim the rewards.[18]

It was during this time that the Animus Premium Access subscription was revealed. For the monthly fee of $9 USD, or the equivalent in the regional currency, players could further their game progression by earning a 20% increase on Daily Login and Daily Objective rewards, 20% faster regeneration rate of Rift Tokens, and 20% faster timers in all headquarter rooms.[19] As part of a promotion celebrating the then-recent release of Assassin's Creed: Odyssey, Alexios and Kassandra were added to the Hero roster.[20] 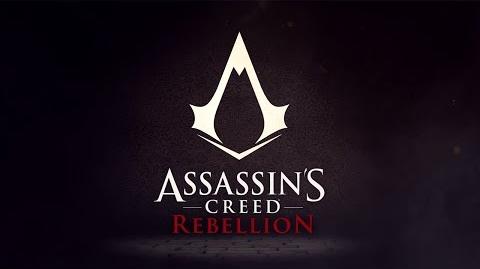 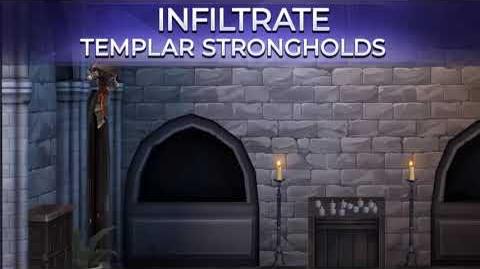 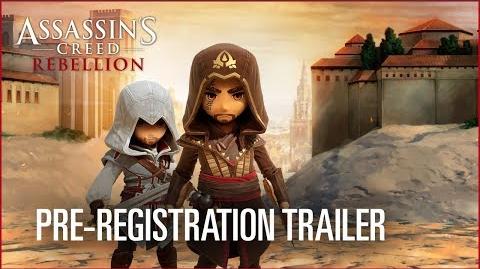 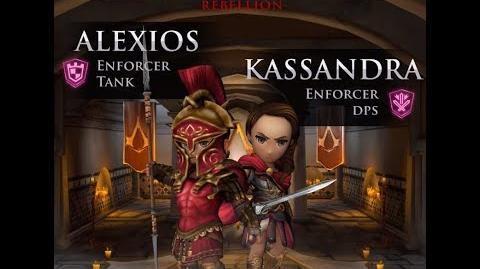 Assassin's Creed Rebellion - Who will you choose ? 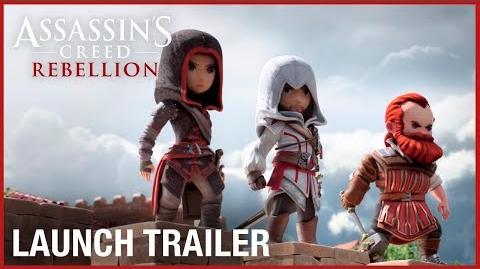