Assassin's Creed Wiki
Register
Don't have an account?
Sign In
Advertisement
in: Articles in need of sources, Articles containing spoilers, Articles that need updating,
and 2 more

Yggdrasil, also referred to as the World Tree,[3] is an ancient supercomputer which was built by the Isu as an intended seventh solution to the Great Catastrophe.[1]

In Norse mythology, Yggdrasil was interpreted as a literal titanic ash tree whose roots and branches connected all of the Nine Realms, which consisted of Asgard, Jötunheimr, Múspellsheimr, Midgard, Svartálfaheimr, Vanaheimr, Helheim, Álfheimr, and Niflheim.[1]

During the Human-Isu War, several Isu became aware of an impending solar flare which would result in both the humans and Isu facing extinction. Realizing that a solution was needed to counter the oncoming coronal mass ejection, some Isu choose to ignore the war and instead focused on finding solutions to save Earth.[4]

After many solutions had failed, Jupiter, Juno, and Minerva—the latest triad to hold the titles of Father of Understanding, Mother of Wisdom, and Sacred Voice, respectively—had come up with a seventh attempt which had a chance of succeeding. This seventh method was called Yggdrasil, a supercomputer which could store an Isu's essence and reincarnate it into the human gene pool across eons. However, disaster struck before they had a chance to use it, though nine members from the Æsir branch of Isu—Odin, Tyr, Loki, Freyja,[2] Heimdall,[5] Thor, Sif, Frey, and Idun[6]—managed to upload their consciousnesses before the computer's laboratory caved in.[7]

Following the Great Catastrophe, the true purpose, design, and location of Yggdrasil was largely forgotten among the remaining human population. In time, it was passed down into myth, where it was reimagined as an immense ash tree that held the cosmos together, and became so important to Norse folklore that Vikings like the shieldmaiden Eivor Varinsdottir of the Raven Clan were known to tattoo it on their body.[8]

Later, Eivor used a psychoactive mixture made by Ravensthorpe's resident seer Valka to relive Odin's genetic memories of his time in the dwarven realm of Svartálfaheimr looking for his captured son Baldr before Ragnarök began. In these visions, Odin often came across altars build around pieces of Yggdrasil's roots, where he could sacrifice a portion of his life force to recharge his Hugr-Rip.[9]

Yggdrasil is an ancient Isu supercomputer which can best be described as the Isu's version of the Animus technology developed by Abstergo Industries. The supercomputer is engineered with a myriad of advanced abilities, some of which include: 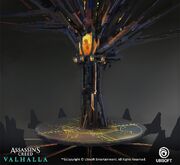 Concept model of the Yggdrasil computer 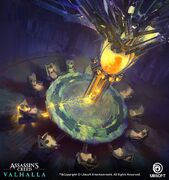 Concept art of the Yggdrasil computer 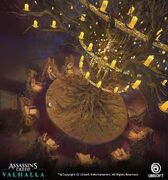 Concept art of Yggdrasil in Asgard

Concept art of Yggdrasil in fog

Concept art of the Yggdrasil chamber in 870s CE

Concept art of the Yggdrasil chamber in 2020 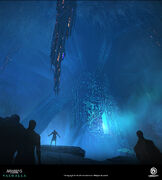 Concept art of Yggdrasil painted beneath an altar in Ireland