Yamauchi Taka (1562 – 1639) was a monk and a member of the Japanese Brotherhood of Assassins, active during the Sengoku period of Japan. He was a friend of fellow Assassin Hattori Hanzō, and after Hanzō's death, worked closely with Tokugawa Ieyasu.

In June 1582, Taka made contact with Chaya Shirōjirō Kiyonobu to retrieve information for a mission he was assigned to by Hanzō. Knowing that Oda Nobunaga would soon be attacked by his vassal Akechi Mitsuhide, Kiyonobu revealed that Taka was to retrieve Nobunaga's Sword of Eden before it would fall into enemy hands. On 21 June, during Mitsuhide's attack at Honnō-ji, Taka killed Nobunaga and brought the Sword to the Chinese Assassin Liu Yan to transport it away from Japan.

In 1596, Hanzō was murdered by Fūma Kotarō, and his lord Tokugawa Ieyasu reached out to Taka to investigate his murder. Realizing that none of Hanzō's rivals had the will or resources to launch such an attack, leading them to suspect that the Imperial Regent Toyotomi Hideyoshi was behind the attack. Ieyasu sent Taka to Date Masamune, a daimyo unwillingly serving the Toyotomi, to find any possible leads. After subduing Masamune, Taka acted upon his information and killed Hideyoshi in Fushimi Castle in 1598.

After the land was divided into east and west in the wake of Hideyoshi's murder, the Assassins continued to support the Tokugawa. Taka later participated in the Battle of Sekigahara on 21 October 1600 on the side of the Tokugawa, fighting alongside Ii Naomasa. After Naomasa was critically wounded by a rifle unit under Shima Sakon's command, Taka assassinated Sakon to exact revenge and ensure victory for the Tokugawa. 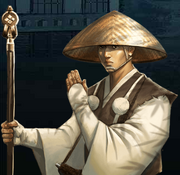 Taka in his monk attire