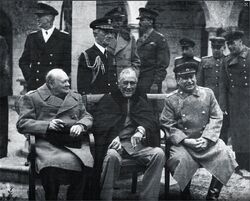 The Yalta Conference was the second of three pivotal meetings between the heads of government of the United States, the United Kingdom, and the Soviet Union that were held by the Allies during World War II to plan the post-war order. It took place in February 1945 in the Crimean city of Yalta, with the incumbent leaders being U.S. President Franklin D. Roosevelt, British Prime Minister Winston Churchill, and Soviet Premier Joseph Stalin.[1]

Because the defeat of Nazi Germany was a foregone conclusion by this stage,[1] one the most significant topics on the table was its immediate division. It was decided that it would be partitioned into distinct military zones occupied by each of their states, with the addition of a fourth zone granted to France.[2] Apart from this, the Allies reaffirmed that Germany's surrender must be unconditional, pledged via the "Declaration on Liberated Europe" that liberated European states would have democratic elections, settled their plan for creating the United Nations, and ensured that Stalin would lend military assistance against Japan.[1]