Xerxes I of Persia

"Nothing. Your deaths mean nothing. The Order cannot be stopped."
―Xerxes before being assassinated, 465 BCE.[src]-[m]

Xerxes I of Persia

Achaemenid dynasty
Order of the Ancients

Xerxes I of Persia (c. 519 BCE – c. 465 BCE), also known as Xerxes the Great, was a king of the Achaemenid Empire during the Greco-Persian Wars, and an ally of the Order of the Ancients in Persia.

Additionally, the Cult of Kosmos supported Xerxes in his attempted conquest of Greece, unsuccessfully trying to sway King Leonidas of Sparta to allow Xerxes to conquer the land through their puppet the Oracle of Delphi.[4] In 480 BCE, Xerxes led a second Persian invasion of Greece. Before crossing the river Strymon, Xerxes had white horses sacrificed as well as nine young women and men buried alive. After that, his army marched to clash with Leonidas' forces at the Hot Gates of Thermopylai in Malis.[3]

To oppose his tyranny, the Persian elite consisting of Darius, Amorges, and Pactyas formed and led a group of freedom fighters against the King.[5] In August 465 BCE, while the freedom fighters attacked Xerxes' convoy, Darius used the distraction and his disguise as one of the king's agents to sneak in from behind and assassinate Xerxes.[6] This act marked the first recorded use of the Hidden Blade.[7][8]

He was succeeded by his son Artaxerxes I.[3]

By the time of the Peloponnesian War, a fort within Lokris was named after him.[3]

The place where Xerxes had performed his sacrifice of horses, women, and men near the river Strymon was afterwards known as Xerxes' Sacrifice of the Nine. The Followers of Ares had made their camp therein, and were subsequently slain by the misthios Kassandra.[3]

By the 420s BCE, Xerxes' story was part of a play written by Thespis, based on the Battle of Thermopylae. The part of Xerxes was set to be played by an actor famous for his previous villainous roles.[9]

Xerxes was known to be a cruel, ruthless, sadistic, ambitious and dictatorial man obsessed with conquering Greece to avenge his own father. He did not tolerate the resistance of his enemies against his massive Persian army, considering it as useless.[6] 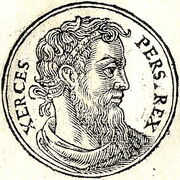 Potrait of Xerxes I