Xenia was a Greek pirate, and the elder sister of Gotarzes, who operated in Keos during the 5th century BCE. An associate of the hetaera Aspasia, she was sought by the Spartan misthios Kassandra, who was looking for the whereabouts of her mother, Myrrine.

After their father disappeared, the siblings were taken care of by their mother, whom Xenia later compared to the goddess Hera in toughness and the goddess Athena in wisdom.[1] When the siblings grew up, they pursued careers as captains. At some point before the Peloponnesian War but after 448 BCE, Myrrine joined Xenia's crew as Phoenix and they sailed together. Unfortunately, Myrrine also parted ways with Xenia before Kassandra reached Keos.[2]

During the Peloponnesian War, Xenia overtook the town of Koressia on Keos with the help of her crew and other pirates, and came into blows with the Athenian leader of the island. Xenia made the local temple of Athena her base.[3] She also pursued legendary treasures, and asked for Kassandra's help with finding them, starting with the Golden Feather of Ajax.[4] 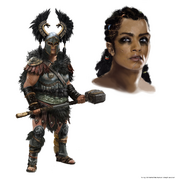 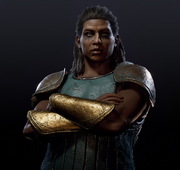 Xenia standing on a terrace
Add a photo to this gallery

Retrieved from "https://assassinscreed.fandom.com/wiki/Xenia?oldid=858444"
Community content is available under CC-BY-SA unless otherwise noted.