Xavier: "I'm the goddamned leader of this mission and I decide what everyone needs to know."
Charlotte: "So, what? I just do what you say, and don't question anything?"
Xavier: "Yeah. It's called taking orders."
—Xavier to Charlotte de la Cruz, 2015.[src]

Xavier Chen (died 2015) was a member of the Assassin Brotherhood and the head of a cell operating in California.

In late 2015, he and his team endeavored to verify the true allegiance of Joseph Laurier, a respected Assassin who had been believed dead by the Brotherhood. To do so, they recruited Charlotte de la Cruz and had her relive the genetic memories of her ancestor, Thomas Stoddard.

Little is known of Xavier's life before he became an Assassin. At some point, he was charged with overseeing a mission that ended in catastrophic failure and all the Assassins under his command were presumed dead.[1] In truth, one of them, Joseph Laurier, survived and went rogue, blaming Xavier for the death of his lover Christian.[2] In 2015, Gavin Banks put Xavier in charge of leading technician Kody and field agent Galina Voronina, with the trio becoming a small mobile Assassin cell.[3]

Xavier: "Have some faith. Believe in Charlotte and Joseph. We owe him the benefit of the doubt!"
Galina: "I owe him nothing. What do you owe him?"
—Xavier and Galina arguing, 2015.[src]

In September 2015, Xavier learned Joseph was alive and had given away the location of a Piece of Eden to the Templars, though a secret message from him claimed that it was actually a ruse intended to draw out a high-ranking Templar. Xavier's cell remained divided over whether or not to trust their compatriot, with Galina believing they should simply kill him, rather than risk the leaking of Assassin secrets. Xavier, reluctant to see Joseph as a traitor, decided they needed to verify his claims before taking further actions.[3]

With Kody's help, they located Charlotte de la Cruz, who was descended from an Assassin active during the Salem witch trials. Traveling to San Diego to recruit her, Xavier and Galina's meeting with Charlotte was interrupted by the arrival of Templar agents. A fight broke out between the two factions, with the Assassins eventually emerging victorious.[3]

Taking the unconscious Charlotte to the Assassins' hideout located near the Salton Sea, Xavier introduced her to Kody and then brought her up to speed regarding the cell's mission. They subsequently put their new recruit into an Animus, but found that she had difficulty staying synchronized with her ruthless ancestor.[3] Charlotte's continued struggles caused tensions between Xavier and Galina to rise, with the former hanging onto his beliefs that Joseph was on their side, while the latter grew ever more convinced that Xavier was being naive.[4]

Xavier was later informed by Kody that the Templar coming for Joseph was Didier Hawking, a "memory-hacking genius". Galina, believing they had already wasted enough time and needed to go back to San Diego, forcefully disconnected Charlotte, leading to another argument. Xavier eventually drew a gun and threatened Galina, telling her that he would shoot her if she attempted to stop Charlotte from going back into the Animus.[5]

When Kody interjected that the Animus could operate in the van, Xavier relented, with the team agreeing that Charlotte could continue reliving her ancestor's memories while they drove back to San Diego.[5] Though Galina remained convinced that Joseph was a traitor, Charlotte woke from her Animus session shortly before the cell arrived. She claimed that Joseph's ancestor, Jennifer Querry, had died before seeing where the Piece of Eden was hidden, meaning Joseph was on the Assassins' side.[1]

Relieved to find that he had been right, Xavier prepared to head out to save Joseph with Galina; Kody hacked the security cameras of the Templars' safehouse, but accidentally stumbled upon a file on Joseph. Since it detailed Joseph's disappearance, Xavier's past failures came to light as well, triggering another argument. After shutting down Charlotte's protests, Xavier left the van with Galina to go rescue Joseph; however, Charlotte continued reliving Stoddard's memories after their departure and discovered Joseph did know where the artifact was, through David, Jennifer Querry's son.[1]

Xavier and Galina passed through a swimming pool and found Joseph shackled in a makeshift interrogation room. Joseph revealed his deception and attacked them: Xavier pushed Joseph into the pool, but was strangled to death with the chain that had held Joseph at his interrogation table. Charlotte was too late to save Xavier, but managed to get Galina out when Abstergo opened fire on all three of the Assassins.[2]

Xavier, introucing himself to Charlotte 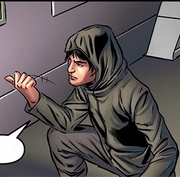