"You couldn't possibly understand my motives, cretin! You, who've spent a whole lifetime dismantling everything that makes our civilization shine. [...] To ensure justice. To snuff out lies and to seek truth."
―Woodes Rogers to Edward Kenway, 1721.[src]

Woodes Rogers (c. 1679 – 1732) was an English privateer, the first Royal Governor of the Bahamas, and a member of the West Indies Rite of the Templar Order. He was eventually expelled from the Order for continuing to trade in slaves.

Rogers joined the Royal Navy in his twenties and rose through the ranks to a Captain. He also inherited his father's shipping company and earned a fortune. Marrying a woman, he would produce a son and two daughters.

However, he lost great amounts of money to the French, which convinced Rogers to travel to the New World to become a privateer. In 1709, he would rescue a marooned sailor which would inspire the book Robinson Crusoe.

According to soldiers stationed in Kingston, Jamaica, it was during this period of time that his ship entered conflict with the Spanish Navy in a ferocious multi-day battle, during which Rogers was shot through the left cheek; however, he was reported to have kept on commanding his men until he was wounded by a wooden shard becoming lodged in his foot the following day. The latter wound healed, but the facial damage left a terrible scar that would never go away.

Rogers would later begin to write and publish his memoirs which had great success and earned him back his fortune. However, the death of his son and estrangement from his wife left him bitter. This was worsened when his former crew charged him for unfairly distributing goods during his career as a privateer.

In 1713 and 1714, Rogers had been stationed in Madagascar, where he parlayed with the local pirates, giving them the same ultimatum he later employed in the West Indies: accept the King's pardon and return to England penniless, but free; or to be hung by the neck until dead. He spent eighteen months around the African island until the pirates had been dealt with, at which time he then headed for the Caribbean.[1]

Induction into the Templar Order

In July of 1715, Rogers and the other Templars in Havana were expecting the arrival of Duncan Walpole, a turncoat Assassin, who was to deliver a blood vial of a Sage, and maps of Assassin encampments throughout the West Indies. They were unaware however, that Duncan was killed by a pirate named Edward Kenway, who took on Duncan's identity to deliver the cargo and claim the reward for himself.

Upon meeting Edward, Rogers remarked that he didn't resemble the man that Rogers' wife described, before introducing him to Julien du Casse, a French arms dealer and a fellow Templar. Afterwards, they met with the Grand Master and governor of Cuba, Laureano de Torres y Ayala, and discussed their plans to locate a First Civilization site known as the Observatory. Torres sent Edward and Rogers down to the docks to collect Bartholomew Roberts, a Sage who could lead them to the Observatory.

Upon arrival, Rogers heard Stede Bonnet call Edward by his real name and questioned him about it. Edward claimed that he gave Bonnet a false name out of caution, allaying Rogers' suspicion. They continued down to the docks, and collected Roberts, before fending off an Assassin ambush. After safely escorting Roberts to the governor's prison, Rogers returned to England in hopes of becoming a governor.[1]

In February 1717, an artifact known as the Fragment of Eden was stolen from Laurens Prins by the Assassin Samuel Bellamy and his pirate allies, Alonzo Batilla and Olivier Levasseur.[2] However, Rogers was ordered to remain in the Caribbean, with the search for the Observatory and the Fragment to remain his sole priority.[3]

"We desire a parlay with the men who call themselves governors of this island! Charles Vane, Ben Hornigold, and Ed Thatch! Come forth, if you please."
―Woodes Rogers, upon arriving in Nassau, 1718.[src]

In 1718, Rogers returned to the Caribbean, having been appointed the governor of the Bahamas, to enforce British rule in Nassau. He offered pardon to the pirate leaders, Edward Thatch, Benjamin Hornigold, and Charles Vane, as well as ordering a blockade of Nassau by the Royal Navy. However, Edward Kenway and Charles Vane escaped Nassau after killing Rogers's military associate, Commodore Peter Chamberlaine, who had intended to disregard Rogers' orders and sink every pirate vessel at Nassau.[1]

Shortly after his affairs in Nassau, Rogers visited the Caicos Islands to deal with remaining pirates who had turned down the King's pardon. With a British war fleet under his command, he encountered two French pirates, Alonzo Batilla and Olivier Levasseur. He didn't know, the two pirates had just recovered the Fragment of Eden and kill the Templar Christopher Condent, upon seeing Rogers' war fleet appear on the horizon, they decided to split up. In response to this, Rogers sent six of his vessels to attack Batilla. However, the young pirate sank all ships, delaying the fleet to give his friend time to flee. Rogers now faced Batilla himself and after a short battle in which Rogers' vessel proved superior, Batilla fled the fight. Rogers did not care to pursue the pirate and ordered his fleet to return to Nassau.[2]

In 1719, Rogers and Hornigold - the only one of the three pirate leaders to accept the pardon - went to Kingston in search of Roberts, who had escaped custody during Rogers' absence. A member of the Royal African Company told them that Roberts' ship, the Princess, was due to arrive soon. The two then met up with Torres and informed him of these developments. Hornigold had already sent Josiah Burgess and John Cockram to Príncipe in search of Roberts. He then spotted the Jackdaw and realized that Edward was following them. The Templars then left the area as their guards pursued Edward.

In 1719, Rogers was sent back to England by Torres, assigned to collect blood samples from members of the British Parliament, for eventual use when the Templars discovered the Observatory's location.[1]

"If you know the Observatory's location, tell us now and you'll be out of here in a flash."
―Woodes Rogers bargaining with Edward Kenway, 1721.[src]

In 1721, Rogers accompanied Torres to Jamaica to interrogate Edward Kenway after his betrayal by Bartholomew Roberts and capture by British forces. As the men observed the sentencing of Mary Read and Anne Bonny, Rogers and Torres made what Edward perceived as veiled threats towards his estranged wife.

They offered Kenway a reprieve from imprisonment and likely execution in exchange for leading them to the Observatory, with Torres warning Kenway that Rogers could only prevent the British from executing him for a certain time. However, Edward was freed by the Assassins before the Templars could acquire the information they wanted from him.

Later that year, Edward traveled back to Kingston with the intention of confronting and killing Rogers. Impersonating an Italian diplomat, Ruggiero Ferraro, Edward slipped into a party being held to celebrate the end of Rogers' tenure as Governor of the Bahamas and his recall to London, a decision with which the man was deeply displeased about, so much so he cursed the king throughout his time during the party.

Positioning himself on a bench, Edward leapt off it as Rogers passed him and stabbed him in the abdomen with his Hidden Blade. Interrogating the injured Rogers, Edward confronted him about the Templars' plans for the Observatory and demanded information regarding Bartholomew Roberts' location, to stop the pirate misusing that power.

Amused that Edward would help the Templars after trying to kill him, and the irony that he has found a friend in his killer at his dying moments, Rogers informed Edward of Roberts having been sighted on Príncipe, before supposedly succumbing to his wounds.[1]

"Would it make a difference if I told you that Rogers currently languishes in debtor's prison? That the wounds that you inflicted on him have left his health in a terrible state of disrepair? That his Order has disowned him? His hot temper, his continued slave trading. He is a broken man, Captain Kenway."
―Robert Walpole, regarding Woodes Rogers, 1723.[src]

Having survived Edward's attempt on his life, Woodes returned to England, bankrupt and humiliated, but still dangerous in the eyes of the Assassins.[1]

Eventually, for his continued trading in slaves and his hot temper, Woodes was expelled from the Templar Order and, by 1723, languished in a debtor's prison.[4] Eventually however, Woodes was released from prison and began to rebuild his reputation, helping to abolish the last remnants of piracy in the West Indies. He died in 1732, in the city of Nassau, during his second term as Governor.[1] 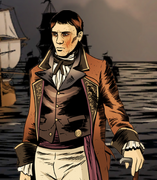 Rogers as he appears in Assassin's Creed: Pirates

Rogers and Chamberlaine meeting with the pirates

Torres, Hornigold and Rogers in Kingston