"Your barons are no better than the King if they take aid from the French."
―William of Cassingham justifying his allegiance to John.[src]

Rallying a guerrilla force against the English barons and their ally, Prince Louis VIII of France, William favored John's authority to that of the baronial rule, despite objecting to his despotic approach; as a supporter of John's son, Henry III, William saw this avenue as the lesser of two evils. 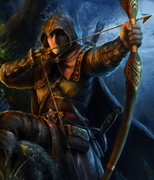 William with his hood up