William McCoy is a scientist employed by Abstergo Industries, and a member of the Templar Order. As the head of the Project Horus for Abstergo, McCoy was put in charge of manipulating the DNA of Subject 19, Mike, adding the genetic memories of the Assassin Jonathan Hawk, to those of the young boy.

In 2012, William was appointed by Alan Rikkin to become the head of Project Horus and thereby taking over the leadership from Laetitia England, who in turn became head of Project Hydra. Project Hydra involved the test subject Mike, whom William had been testing since birth. Laetitia however, just met the young boy thus William was also tasked to explain the project to Laetitia.[1]

Furthermore, William played an important role in Project Horus. After the Templar agent Vernon Hest obtained the eyeball of Jonathan Hawk[2], McCoy conducted an operation on Mike and transfered Hawk's DNA into the genotype of Mike. The operation was successful; Mike's genotype 'adopted' the genetic information of the Assassin.[1]

Some time later, Alan Rikkin convened several other Templars to inform them about this 'revolutionary' succes. William then explained the project to his fellow Templars and he stated that Abstergo could, due to Mike's incredibly flexible DNA, view all memories of their enemy, through Mike.[1] 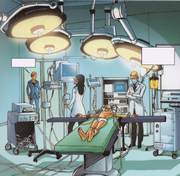