The Whydah, also known as the Whydah Gally, was a British frigate originally built as a slave ship for Laurens Prins, and functioned as a pirate vessel for Samuel Bellamy before his death in 1717.

Named after a trading post on the West African Gold Coast, the Whydah was built in England in 1716 as a massive galley with three masts, weighing three hundred tons. It was used by Laurens Prins to transport slaves across the Atlantic Ocean.[1]

In February 1717, Prins used the Whydah to transport a Piece of Eden – a "Fragment" – from Africa for the Templars. This had caught the attention of the Assassin Order, who sent Samuel Bellamy, an Assassin posing as pirate, to intercept the artifact. En route, the Whydah was attacked by Bellamy and the pirates Olivier Levasseur and Alonzo Batilla, to which the latter managed to cripple the vessel, enough so for it to be taken by Bellamy as his flagship.[2] Afterwards, Bellamy and his crew converted the Whydah from a ten-gun galley to a twenty-eight gun galley.[1]

Using the Whydah, Bellamy subsequently plundered several ships near Virginia. Along with Bellamy's other ships, the Whydah then attempted to reach Block Island, off the coast of Rhode Island. With the weather worsening, the ships soon lost contact with each other. On 26 April 1717, while near Cape Cod, the Whydah was hit by a storm.[1]

It was at this time that the Templars attacked, believing that Bellamy still held the Fragment of Eden. They destroyed the Whydah and killed Bellamy and the entirety of his crew.[2]

Laurens Prins standing on the deck of the Whydah

The hold of the Whydah 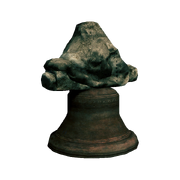 The bell of the Whydah
Add a photo to this gallery

Retrieved from "https://assassinscreed.fandom.com/wiki/Whydah?oldid=735256"
Community content is available under CC-BY-SA unless otherwise noted.