Weke (died 259) was the servant of Lucius, and was aware of the Assassin affiliation that his master and his master's son, Aquilus, shared.

In 259, Caius Fulvus Vultur, secretly a Templar, visited his old friend Lucius in Lugdunum, but only with the purpose of retrieving the Ankh which had not long been brought there; Vultur killed Lucius and took the Ankh while Aquilus was interrogating Faustinus, though Weke chased after him.[1]

However, Vultur faced Weke and fatally wounded him. At the same time, Aquilus hurried home, only to find his father dead and Weke sitting against a wall. With his dying breath, Weke told Aquilus that "eagles do not fear vultures... but they should learn to be wary of them."[1] 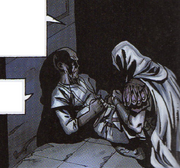 Weke, speaking to Aquilus, in his final moments