The Wayfarer (harvested from: Manuel Mendoza) was an Animi Avatar used by the entertainment branch of Abstergo Industries, as part of their plan to influence the general public, via the console stage of the Animus technology. He uses an iron headed club as his specialty weapon.

Approaching his target slowly, the Wayfarer grabs them by the neck and squeezes it roughly, immobilizing them and choking them at the same time. From there, he retrieves his club from his belt and sweeps their legs out from underneath them, sending them collapsing to the floor. With his victim defenseless, the Wayfarer brutally slams his club down onto their chest, shattering their rib cage and leaving them coughing up blood.

Stealthily walking up to his target from behind, the Wayfarer roughly shoves them by the shoulder, causing them to turn around in response. Having already unsheathed his club, he forcefully smashes it into their face, shattering his victim's skull and killing them instantly.

Closing in on his target from behind, the Wayfarer takes out his club and violently sweeps their legs from beneath them, toppling them hard into the ground. He then brings the club around and swings it down onto his victim's face, crushing it messily and killing them instantly.

Rushing to his target, the Wayfarer kicks his foot into their stomach, winding them, before wielding his club in both of his hands and smashing it upwards. Driving his weapon into the face of his keeled over victim, his weapon breaks their skull as they are knocked upwards into the air. From there, the Wayfarer secures his club at his side before gravity returns them to the floor, head first.

Forgoing a stealthy approach, the Wayfarer runs up behind his target and withdraws his club from his belt. Wielding his weapon one-handedly, he skilfully swings it into their leg, shattering their knee and unbalancing them slightly; this causes his victim to turn in agony as the Wayfarer fluidly spins beside them to build up momentum. Once he fully rotates himself, he savagely smashes his club into their skull, breaking it and sending them hurtling sideways to their death, with him soon sheathing his club.

Leaping from an elevated position, the Wayfarer draws his club and lands on top of his target, while using the momentum of his fall to drive his club into their face, crushing their skull as a result. Standing up while his target lays dead, he pulls out his weapon and sheathes it away.

Grabbing his seated target's foot, the Wayfarer drags them off the bench until their head rests against it. Before his victim can do anything to defend themselves, the Wayfarer forcefully kicks them in the face, violently sending their head backwards and breaking their neck on the bench behind them.

The Wayfarer could be customized in several ways:

Concept art of the Wayfarer

The Wayfarer assassinating the Dandy

The Wayfarer being stalked by the Shaman 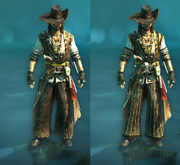 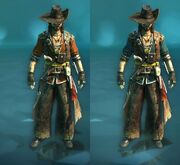 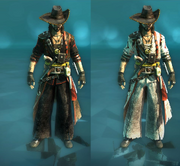 Templar and Assassin Costumes for Wayfarer 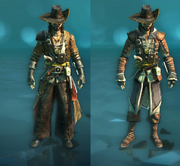 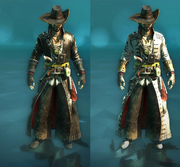 Desperado and Prestige Costumes for Wayfarer 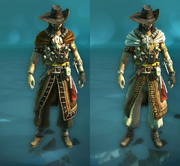 Retrieved from "https://assassinscreed.fandom.com/wiki/Wayfarer?oldid=831119"
Community content is available under CC-BY-SA unless otherwise noted.