Vlad III Tepes (1431 – 1476), also known by the title of Vlad the Impaler; his birth name, Vlad Draculesti; and the patronymic name Dracula, was a Voivode of Wallachia who ruled the region intermittently from 1448 to 1476.

As a member of the Templar Order, Vlad Tepes played a significant role in the Order's fight against the Ottoman Empire. In 1476, Vlad was defeated by Ishak Pasha, the Ottoman Grand Vizier and, incidentally, the leader of the Ottoman Assassins.[1]

Following his capture, Vlad died shortly after, with his decapitated head brought back to Constantinople as a trophy, and together with his sword, deposited in a specially made prison just outside the Constantinian Walls.[2]

Vlad was also the role model of a Wallachian Assassin, Vali cel Tradat. His death, which Vali believed the Ottomans were responsible for, coupled with the fact that the Assassins had brokered a truce with the Ottoman Empire, led to Vali's eventual betrayal of the Order.[3]

Vlad the Impaler was later the inspiration many vampire legends and stories surrounding him.[4] According to said legends, some people believed that Vlad was a vampire because of his pale white skin and the fact that he only went outside occasionally. This folklore, combined with his ruthless acts during his reign, was the beginning of the vampiric mythology attached to the Wallachian Voivode.[5]

Dracula's sword was eventually recovered in 1511 by Ezio Auditore da Firenze, Mentor of the Italian Assassins. While Ezio recovered Vlad's sword from the tomb, a skull bearing long canine fangs could be seen, furthering the rumors of Vlad's vampirism.[2]

In 2012, his genetic memories were used as an Animi Avatar by the Templar company Abstergo Industries, for the second stage of training for the recruits in their Animi Training Program, under the title of the Count. Despite historically possessing a sword, his avatar in the Animi Training Program uses a mace instead.[6]

Known as brutally violent among his enemies, his actions quickly garnered the reputation of being a monster.[4] He was given the nickname "The Impaler" as a result of the way he would torture his victims. He would put lard or some type of lubricant on a large wooden spike and place them at the top of it, with it between their legs, and eventually his victim would be impaled. Afterwards, the spikes would be formed in a large circle as a barricade around Vlad's fortresses, also used to threaten any who opposed him.[5]

Vlad the Impaler is a historical individual and makes an appearance in Assassin's Creed: Revelations. Vlad is usually thought to be shortened from names beginning with the Slavic element volod, "to rule". Tepes is Romanian for "impaler".

Vlad's skull inside his coffin 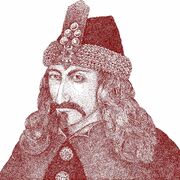 Vlad Tepes in Who's In Your Blood?