Assassin's Creed Wiki
Register
Don't have an account?
Sign In
Advertisement
in: Articles in need of sources, Timeline, Wars,
and 2 more

The Vietnam War was a conflict in Vietnam between two rival governments which escalated into a full-scale invasion by the United States of America. Traditionally dated from 1955 to the Fall of Saigon in 1975, it occurred in the context of the Cold War as the Marxist North Vietnam was supported by the Soviet Union and the People's Republic of China and South Vietnam was supported by the United States and its allies. For the North Vietnamese, the war was viewed as a resistance against the perpetuation of colonialism, a sequel to the First Indochina War against their French overseers. For the United States, it was feared that a unification of Vietnam under the communist regime would have a domino effect that would lead to more and more countries falling to the Soviet bloc.

South Vietnamese President Ngô Đình Diệm was a puppet of the Templar Order who supported him and his nation in the war against their northern adversaries. CIA and Templar agent Cooper was captured by William Greer and the Bloodstone Unit, a cell of Assassin extremists, while in the country on business for the Order. Cooper's capture and interrogation greatly helped the Bloodstone Unit in infiltrating the Templar plot to assassinate President John F. Kennedy. Following Kennedy's death at the hands of the Bloodstone Unit, his successor, the Templar Lyndon B. Johnson, gregariously escalated U.S involvement and support for South Vietnam.[1]

In 1964, Templar William King Harvey used a distress call from Colonel Boris Pash to fabricate a story about the USS Maddox having to intrude in the Gulf of Tonkin to rescue him and sustained enemy fire from the North Vienamese, giving President Johnson an excuse to escalate the war.[2]

In 1968, US forces burned a Viet Cong base camp in Mỹ Tho.[3] In 1975, all US troops withdrew from the country under the exit plan previously initiated by former US President and Templar puppet Richard Nixon, allowing North Vietnam to annex the entire country. [citation needed]

André Bolden participated in the conflict and for his efforts was awarded a Purple Heart. However as a side-effect, Bolden suffered for the rest of his life from PTSD due to some actions he committed during the war.[4] 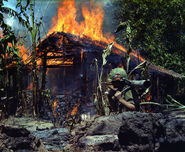 Burning Viet Cong Base camp
My Tho, Vietnam, 1968