Vernon Hest (unknown – 2012) was an agent of the Templar Order under the direct orders of Laetitia England, and later, Mitsuko Nakamura. In 2012, he was tasked with finding and retrieving the Scepter of Aset. He was a descendant of Leila, an Egyptian Templar agent.

In 1999, Vernon lead an operation to arrest the Assassin Jonathan Hawk in a hotel in Atlanta. After an undercover Templar woman had won Hawk's trust by having sexual intercourse, Vernon and a group of other Templars entered the hotel room and arrested the surprised Assassin.[1]

Vernon then took Jonathan to a safehouse where he interrogated and tortured him in the hope to get any useful information. Jonathan however, continuously remained silent and did not cooperate in the interrogation. Vernon told Jonathan that his employers would be displeased if they failed to glean any information, and that the torture would stop if Jonathan told what he knew. As a response, Jonathan spat Vernon in his face, on which an annoyed Vernon reacted by stabbing Jonathan in the right eye with a screwdriver.[1]

At that moment, three Assassins came to rescue Jonathan and eliminated the Templars guarding the building. Vernon managed to dive away, found cover and killed two of his enemies.[1]

Before the last remaining Assassin could open fire upon Vernon, the Templar escaped by jumping through a window. Jonathan was saved from the Templars, though his right eye was so severely damaged that he lost his ability to see.[1]

In October 2012, Vernon was part of Project Horus, an Abstergo Industries operation. He was tasked to retrieve the eyeball of Jonathan, who had recently underwent a surgery. Hest attended a secret meeting in a hotel in Cairo concerning the eye and eliminated his contact during the price negotiations. Vernon then contacted Laetitia to bring word of his success and waited for further instructions.[2]

Some time later, Laetitia informed Vernon about new information regarding the Scepter of Aset, an important artifact which conferred charisma and leadership to its wielder. He was tasked to find the artifact, before the Assassins did, by reliving the genetic memories of his ancestor, Leila. Laetitia transferred him confidential data on the object.[2]

Later, Hest was contacted by Mitsuko Nakamura, who not only informed him about Laetitia being replaced by Nakamura as his superior, but also telling him that Steve, a Templar 'mole' would soon eliminate Hest's competitor, Jonathan Hawk. Vernon however, was not very satisfied with this news, as he and Hawk still had to 'settle the scores'.[3]

Vernon continued his Animus sessions and relived the memories of Leila, who turned out to be a Templar agent aswell, and was responsible for the assassination of the Egyptian Sultan Al-Nasir Muhammad. However, his sessions made little progress and he informed Alan Rikkin that he needed more time.[1]

In the meantime at Abstergo, Project Horus continued. The test subject Mike was able to relive the memories of the Egyptian Assassin Numa Al'Khamsin, through the DNA that was stored in the eyeball of Jonathan Hawk, with as goal the find the Scepter of Aset. However, the project had been in vain, because Numa was trapped and killed by the Templar Leila.[1]

Although Numa had died and thus Project Horus had failed to succeed, Abstergo found out that Leila had been pregnant by Numa. When confronted by this news, Laetitia decided not to let Vernon continue his Animus sessions but instead called William McCoy, Mike's supervisor. She insisted that they should use Mike to research Hest's DNA in order to find the Scepter more quickly. Hesitantly, William agreed and Mike took over Vernon's job in searching the artifact.[1]

That night, Mike had already examined all required memories and the Scepter's coordinates had been located. William brought the news to Laetitia, who in turn contacted Vernon. He was to retrieve the Scepter of Aset.[1]

Retrieving the Scepter of Aset

Already in Egypt, Vernon could get quickly to the jewelry shop in Edfu, where the Scepter was located on the bottom of a well. However, the Assassins had been faster in finding the artifact's location and were already there. Knowing this, Vernon showed a picture of Jonathan to a taxi driver and asked if he had seen the man. The driver told Vernon he had entered the shop. Inside, Vernon asked the shop owner where to find Jonathan, which led him to the shed behind the store.[1]

Upon entering the shed, Vernon was blinded by complete darkness. Although he could hear Jonathan, Vernon was unable to see the Assassin. Ironically, Jonathan could see him because he had installed a robotic eye with night vision function in his right eye socket. Desperately trying to shoot his archrival, Vernon was pushed into the well by Jonathan, and instantly died upon hitting the ground.[1] 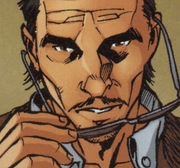 A close up of Vernon

Vernon lying on the bottom of the well, dead