"Ah, Venezia! What other place is as beautiful, as stable, as perfect?"
―Alvise da Vilandino, 1481.[src]

Venice (Italian: Venezia), is a city located in northern Italy. During the 15th century, Venice was the capital and largest city of the Most Serene Republic of Venice, and consisted of five districts (or sestieri): San Polo, San Marco, Dorsoduro, Castello, and Cannaregio.

Originally founded by refugees from the Hunnic and Germanic invasion of Padua, Aquileia, and Altino, Venice developed into a major trade and naval power in southern Europe, becoming one of the wealthiest cities in the world, and by the year 1499, it was engaged in sporadic conflict with the Ottoman Empire.

Likely established sometime around the late 7th century, Venice's lagoon-locked location was the result of Byzantine settlers attempting to hide from Lombard invaders. By the Middle Ages, the city had grown into a great naval power. Its strategic position at the top of the Adriatic also meant that ships taking goods inland had to go through Venice, filling its coffers with money and commerce.[1]

Entering the late Middle Ages, Venice exercised influence over both its neighboring states and the Church. When the Fourth Crusade rolled around in 1202, the crusaders required transport on Venice's ships, which the Venetian Doge, Enrico Dandolo, agreed to, on the condition that the crusaders retake the Dalmatian city of Zadar and then capture Constantinople.[1]

As Venice's wealth grew, so did its fleet. Through sea battles, Venice gained Byzantine territory, Hungarian territory, and destroyed the Genoese fleet. Venice's fortunes were so entwined with the sea that every year the Doge would throw a ring into the lagoon while saying in Latin: "We wed thee, sea, in the sign of the true and everlasting Lord." Despite much controversy about the morality of a relationship between humans and the sea, the marriage was sanctioned by the Pope.[1]

As early as the 13th century, Venice had a notable Assassin presence; the area surrounding Venice was home to an Assassin and his son, Domenico. Both enjoyed the patronage of the famed explorer Marco Polo, an ally of the Assassins.[2] Assassins remained present in the city up into the 15th century, occupying positions of command amongst the thieves, mercenaries, and courtesans of the city.[3]

"What are your masters plotting? Speak! As God is my witness I will cut your throat!"
―Giovanni threatening the Barbarigo courier, 1476.[src]

After the Templar-orchestrated assassination of Galeazzo Maria Sforza in 1476, Giovanni Auditore da Firenze departed for Venice after finding a Venetian coin in Giovanni Andrea Lampugnani's possession.[4]

Arriving in Venice, Giovanni Auditore assassinated a guard at the Doge's residence, the Palazzo Ducale, and made his way inside the building. Once inside, Giovanni spied on a meeting between two members of the Barbarigo family and a courier, who was set to carry a letter to their master.[4]

Giovanni tailed the courier through the city streets, eventually attacking him in a deserted square. Following this, Giovanni fought fiercely with the courier, and eventually pressed his Hidden Blade to the courier's neck, demanding to know what his masters were plotting. However, the courier claimed that his life was not Giovanni's to take, and that his secrets would be gone with himself.[4]

The courier then told Giovanni to "go to Hell", before impaling himself on the Assassin's blade. Giovanni then took the letter that the courier had in his possession and departed from the city.[4]

Following the Templars' failure to usurp control of Florence during the Pazzi conspiracy in 1478, Grand Master Rodrigo Borgia and his allies – the Barbarigo family – stepped up their plans to take control of Venice.[3]

Influencing powerful members of the Venetian government, such as Carlo Grimaldi, the Templars built up a network of allegiances in the city. However, these allegiances were severed as an Assassin, Ezio Auditore da Firenze, began to hunt these members of the Templar Order throughout Venice.[3]

"There are still others I must hunt, Signore. They're already digging their claws into the heart of Venezia."
―Ezio to Lorenzo de' Medici after the events of the Pazzi conspiracy.[src]

Ezio Auditore arrived in the city in 1481, and quickly allied himself with the Thieves Guild based in Venice, before he and the thieves gradually proceeded with a plan to assassinate the powerful Venetian merchant, Emilio Barbarigo.[3]

Once their preparations had been completed, Ezio left for the Palazzo della Seta, the residence of Emilio. Before slaying the corrupt merchant, however, Ezio observed Emilio meeting with a government official, who informed the former of a Templar gathering to take place in three days at Santo Stefano.[3]

After assassinating Emilio, Ezio tailed the Templar meeting and overheard discussions of a plan to assassinate the Doge of Venice, Giovanni Mocenigo. Confused and worried, Ezio decided to meet with Antonio de Magianis, leader of the thieves in Venice, and the two attempted to get Ezio inside of the Doge's palace using a Flying Machine created by Leonardo da Vinci.[3]

However, the Assassin was unable to reach the Doge in time to prevent his death, but Ezio did manage to assassinate a fleeing Carlo Grimaldi. After this ordeal, the Templars placed one of their own, Marco Barbarigo, in control of Venice.[3]

Once brought in as the new Doge, Marco was remarked to be a terrible leader that never left his Palazzo, for fear of the Assassins. Marco could not evade the Assassin forever though, and in 1486, he hosted an annual private ball on Carnevale, for select guests chosen by the Doge. However, there was a Golden Mask that allowed one person entrance to the private party, as long as they were able to win it through a series of games.[3]

With this in mind, another one of Ezio's allies in the city, Teodora Contanto, brought Ezio to the Carnevale games, where he competed in four different games, utilizing his special skills to win each game. Despite his victory, Silvio Barbarigo and his bodyguard, Dante Moro, knew of Ezio's plan, and bribed the host of the games to give the mask to Dante. Angry and desperate, Ezio then headed back and met with Teodora and Antonio, who advised him to steal the mask off of Dante, rather than Ezio's idea of killing him.[3]

After stealing the golden mask, Ezio headed for the Doge's party, and was allowed in without any hesitation by the guards. However, Dante arrived just after Ezio and searched the crowd, unsuccessfully, for the Assassin. Ezio then emerged as Marco spoke on a boat offshore, and shot him with his Hidden Gun.[3]

Following the assassination of Marco Barbarigo and the ascension to power of his brother, Agostino Barbarigo, an ally of the Assassins, Ezio began to search for Silvio Barbarigo, cousin to Agostino, and his bodyguard Dante Moro. Ezio learned that the two had barricaded themselves within a shipyard with two hundred mercenaries accompanying them. In need of support and an ally, Ezio freed the notorious Venetian fighter and strategist, Bartolomeo d'Alviano, from a small prison in the military district, and the two plotted to rid the city of Silvio and Dante.[3]

After discussing a plan to kill both Silvio and Dante, Ezio liberated Bartolomeo's captured mercenaries, and then set them up in strategic points around the city, in order to create chaos and cause Silvio to dispatch some of his men. With Silvio's mercenaries engaged in battles around the city, Bartolomeo and Ezio attacked the arsenal, with Bartolomeo battling Dante and Ezio fending off the guards at the gates. Eventually, Silvio ordered Dante back to the shipyard and sent out his reinforcements, as their Templar ship was about to set sail. However, Bartolomeo and his men fought off Silvio's reinforcements, and bought Ezio enough time to assassinate the two Templars.[3]

Although Venice was finally freed from its Templar oppression, Ezio learned from a dying Dante that the Templar plot to acquire Venice had merely been a distraction for the Assassins, so that the Templars might safely dispatch their vessel to Cyprus.[3]

Under Agostino, Venice initiated a second war with the Ottomans. A disastrous campaign for the Venetians, the Republic suffered a massive defeat at the Battle of Zonchio that led to the destruction of the Venetian navy. The Ottomans, taking advantage of this defeat, seized the Venetian territories of Lepanto, Modone and Corone.[5]

In 1500, Venetian navy become one of the most powerful forces in the world.[6]

Between 1502 and 1503, Francesco Vecellio and his team of Assassins traveled to Venice to poison the corrupt and Borgia-influenced Agostino Barbarigo. Before they left, he made sure that Agostino's successor was on the Assassins' side.[7]

In 1509, Venetian army was defeated by the French Army at the Battle of Agnadello. The Venetian Captain Bartolomeo d'Alviano was being captured, and shackle.[8] The battle marked the end of Venetian expansion in Italy and elsewhere.[6]

Years later, in 1512, Ezio Auditore and Sofia Sartor traveled to Venice, where they subsequently married, before heading on to Tuscany.[9]

In 2012, Venice was used as a simulated location by Abstergo Industries during the first and second stage of their Animi Training Program.[10]

The simulation centered around the Piazza di San Marco, as well as the nearby docks. Presumably because of high tide, most of the dock area, which largely contained market stalls, was filled with water.[10]

A tall, vaguely L-shaped building separated the two areas, with merchandise lifts set up at various points to allow quick access to its roofs. The plaza itself was mostly filled with stalls of varying sizes, at least one of which featured firebreathers, joined by the occasional haystack.[10]

Venice, like most of the simulated locations in the first and second stage, had two aesthetic variations. As such, it could be utilized during the day or the night.[10]

Venice hosted the famed Carnevale celebrations annually in the southern section of the city. Traditionally, the citizens of Venice would don masks, allowing them to indulge in a variety of entertainments wilder than would normally be socially acceptable. Typically, Carnevale was celebrated with fireworks, carnival performers, and a series of games, with the winner of these games being awarded a golden mask that granted entrance to the Doge's personal ball.[3]

Concept of the Grand Canal during Carnevale

Concept of the Piazza San Marco

Concept of the Arsenale di Venezia

Ezio on the Rialto Bridge overlooking the Grand Canal
Sneakattack from haystack.jpg
Ezio silently taking out a guard

A panoramic view of the Basilica di San Marco

Panoramic View of the canal-ways

Panoramic view of the marketplace in Venice 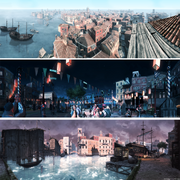 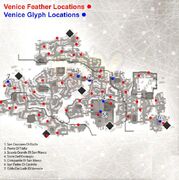 A map of Venice

A skirmish in Venice, featuring Noblemen and Smugglers

A map of Venice in the Animi Training Program

Overview of Venice.
Add a photo to this gallery

Retrieved from "https://assassinscreed.fandom.com/wiki/Venice?oldid=897924"
Community content is available under CC-BY-SA unless otherwise noted.