Shaun Hastings: "Whatever this is, it doesn't do anything. It's a dead end."
Desmond Miles: "I'm not so sure..."
—Shaun Hastings and Desmond Miles before activating a pedestal in Rome, 2012.[src]-[m]

A Vault pedestal was the central point of a First Civilization Vault and a fundamental component to its workings. Operating the chamber with which it was linked, the pedestals could often interact with a Piece of Eden, or with a descendant of the First Civilization and the humanity's crossbreeding, which would therefore allow them access to whatever purpose the Vault existed for.[1]

Cave of Gold in the Isle of Skye

One vault pedestal was found in the Cave of Gold, in the Isle of Skye, Scotland, and was activated once all five of its triangular shards were placed in their respective slots.[2] It was used to open a hidden vault door which led to the inner sanctum of containing an Apple of Eden. In the late 9th century CE, [citation needed] both the Viking shieldmaiden Eivor Varinsdottir and the Spartan mercenary Kassandra discovered the pedestal together.[3] On entering the sanctum, their combined efforts were enough to deactivate the Apple.[4]

One of these pedestals could be found in the Santa Maria in Aracoeli, in Rome, and was only accessible after unlocking several levers incorporated into the structure of the building. It was used to activate an elevator that would take the pedestal's activator to the entrance of the Colosseum Vault, which was in turn opened by a hidden password.[5] Desmond Miles found this pedestal and activated it with his DNA in 2012.[1]

A second pedestal was found inside the Colosseum Vault itself. When activated, it would cause the vault to change from an almost empty chamber to being filled with glowing platforms. After completing the room's challenge, the visitor would be able to reach the central platform.[6] In 2012, it also acted as a catalyst for Juno to take possession of Desmond's body once his DNA communed with the Apple placed on top the pedestal.[1]

Another pedestal was located in the Pythagorean Vault, located deep inside the Temple of Pythagoras, which was visited by Ezio Auditore and Leonardo da Vinci in 1506. Leonardo discovered the temple where the Vault was located, which was rumored to contain a "perfect number" that would allow its possessor to change mankind. When Ezio placed his hand over the top of the pedestal, his DNA communed with it, filling the chamber with codes, numbers, and letters. Leonardo could not understand the meaning of it, while Ezio suggested that it was meant for someone else.[7]

Up until at least the 1st century BCE, there were multiple vaults throughout Egypt. These vaults possessed pedestals that, when activated with silica, relayed pre-recorded messages intended for Layla Hassan from various Messengers.[8]

Living through the memories of the Medjay Bayek of Siwa, Layla witnessed the recordings as Bayek explored the vaults. However, Bayek was not the only one aware of them, as Khaliset, a member of the Order of the Ancients known as "The Hyena", had also found the one within Khesesh Em Sesh Em Eeneb and believed that the "magic stone of Those Who Came Before" would help resurrect her daughter, Eshe.[9] 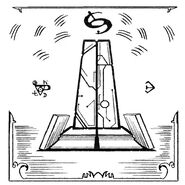 Brutus' sketch of the pedestal within the Colosseum Vault