The Vanguard (harvested from: Oksana Razin) was an Animi Avatar used by Abstergo Industries to train recruits in the second stage of their Animi Training Program. She used a small hatchet as her primary weapon.

The Vanguard had several unique moves:

Casually approaching from the front, the Vanguard pulls out her weapon and butts its head into her target's stomach, winding them, which makes them bend over. Wasting no time, she swings the hatchet down at her victim's exposed back, severing their spine and killing them. She then removes her axe from their body and stores it back at her waist as her contract collapses backwards.

Taking out her hatchet, the Vanguard embeds it into the right of her target's hip, making them recoil in agony, before she removes her weapon and strikes down hard in between their shoulder blades. Her victim driven to their knees, she lets them collapse as she sheathes her axe.

Rushing headlong towards her target, the Vanguard suddenly swings her axe into her victim's forehead, causing her victim to kneel slightly. She then shunts their lowered head up with her knee, freeing the axehead and exposing her target's neck. In one fluid motion, she spins around to gain momentum and finishes off her target by slitting their throat with the razor edge of her axe.

Running up to her target from behind, the Vanguard grabs their right shoulder and uses her legs to swing herself up into the air and over them. While in mid-air, she embeds her hatchet into her victim's ribcage violently, before she slices the axe deeply more into their chest as she rips it out.

Grabbing her seated target's foot, the Vanguard drags them off the bench until their head rests against it. Before her victim can do anything to defend themselves, she forcefully kicks them in the face, violently sending their head backwards and breaking her target's neck on the bench behind them.

Having spotted her target, the Vanguard leaps from above and draws her hatchet in mid-air. With the added momentum, she smashes her axe into their head, brutally killing them, before she gets up and hastily yanks it out.

The Vanguard could be customized in different ways:

Concept art of the Vanguard 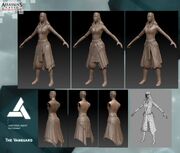 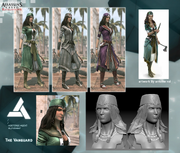 Clothing customization for the Vanguard

The Vanguard, looking over the city of Rhodes from above

The Vanguard running to steal the Sentinels' artifact

The Vanguard assassinating the Bombardier

The Vanguard killing her target, the Guardian, while a chase is occurring in the background

A Vanguard fleeing her pursuer by executing a Leap of Faith