"I am better than well. I am present."
―Valka to Eivor upon arriving in Ravensthorpe, 873[src]-[m]

Valka was the wise woman responsible for retaining the religious beliefs of the Raven Clan of Vikings at their new settlement of Ravensthorpe.

The daughter of the seeress Svala, she decorated her home with strings of bones and beads, and for a price, would concoct a mixture to drink that induced a hallucinatory state which sometimes sent the consumer to what was commonly accepted to be Asgard.

Seeress of the Raven Clan

"The gods favor you, Eivor. They always have. You will have your glory, and you will earn your place in Valhalla. But these portents carry a darker truth. The missing arm, the trail of blood, the beast. You will betray your brother, Sigurd. That is the meaning of your vision."
―Valka to Eivor on her visions, 872.[src]-[m]

Valka was born to Svala, a seerest of the Raven Clan who was a reincarnation of the Isu Freyja.[1] She eventually took over her mother's duties as the clan's seeress and lived in a house situated on the mountain near Fornburg. There, she would often receive visits by the clan members to seek blessings and visions on numerous matters.[2]

In 872, Valka was visited by a returning Eivor Varinsdottir, who had returned from her mission to hunt down Kjotve the Cruel. Eivor sought advice for her visions that she received after she had recovered her father's axe, which Valka concluded to be a vision of Odin. She then proceed to produce a concuction to allow Eivor to tap into her visions that she saw. A while later, Eivor recovered from her vision and informed Valka what she experienced. Valka proceeded to decipher what Eivor saw, concluding that she would have her glory and she would betray her brother Sigurd, a prophecy which Eivor refused to believe.[3]

Shortly after King Styrbjorn ceeded his kingdom to King Harald Fairhair, a portion of the Raven Clan planned an exodus from Harald's kingdom. Valka was one of those who attended a secret meeting organized by Sigurd, who made the decision to move to England. While the members agreed to follow both Sigurd and Eivor, Valka chose to remain behind to take care of her ailing mother, wishing Eivor good luck on her journey but assured her that they will meet again.[4]

Concept model of Valka in Rebellion 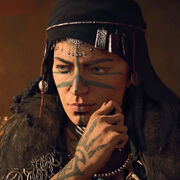 Valka consulted by Eivor of her visions

Valka as she appears in Rebellion