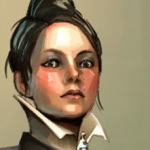 Hello there, just droppping in to say if you are going to edit a pgae, try to do all the editing in one publish...don't keep publishing the same page then editing over and over again, as it helps to edit once so we dont clutter the news feed (and so if something is wrong, it saves time to just undo one edit rather then a bunch). Thanks! :> --Fragment -Animus- 01:43, September 8, 2013 (UTC)

As you can see, my edits were to different sections of the page, as I had only intended to do small edits in each section, then noticed errors in others. I don't really see how three edits to three different sections clutters the already very busy newsfeed, but all right.

I also noticed you went back and changed some of my edits because they "weren't really needed." I strongly disagree, since I was fixing poor phrasing (i.e. "Lee and a group of Templars came to the village, demanding access to the spirit sanctuary, but were denied access and left" - access should not be used twice, because already know what they were denied from the first part of the sentence), but do as you will.

Why did you undo my edit on the Julius II page?

I said in the edit summary why I did it--we don't know where that image comes from. It's not sourced, and it doesn't appear to be an image from any of the games. Where did you get it? How do we know that image is depicting Julius II?

Also, as a head's up, images are carefully tracked and any photos that aren't sourced properly will be deleted. -Molotov.cockroach (talk) 07:23, January 11, 2014 (UTC)

Sorry to butt in but Wikipedia is not a reliable site... You can't just copy something without checking it's reliability... --

Hey, thanks for your help in the Modern times page! :)

Well thank you. It was a pleasure. :)

So, I noticed you added this "Assassin's Creed Brotherhood events" category to things like the Siege of Viana or the Liberation of Rome. I believe this kind of category is OOU (they refer to the "games"), but since you're a contributor that seems to know what he's doing most of the time, I wasn't entirely sure whether I needed to undo these additions. Could you get back to me about this? :)

It's entirely possible I got that wrong. I just saw that category attached to things like the Siege of Monteriggioni, and thought it would be appropriate to add it to others if that was how it should be used. I see Stormbeast has since removed those categories, so if I did it anywhere he missed feel free to remove it. I'll remember that for the future. -Molotov.cockroach (talk) 23:03, February 23, 2014 (UTC)

Hey, Molotov. I was out sick last night. So, what I wanted to revert was the [[Syria]]n styling in the introduction -- we never want to break links like that. It's much better to use [[Syria|Syrian]]. That being said, good eye on catching something I didn't see! No, I didn't want that codebox styling that ended up on the lower paragraph, and luckily Kain has fixed it. I guess what it comes down to is being precise in your edits so that only the things you want to fix are. Thanks for following up and good eye! DarkFeather Raven's NestRaven's Hunt 02:22, March 6, 2014 (UTC)

Dark, the wiki automatically shortens things like [[Syria|Syrian]] or [[Egypt|Egyptian]] down to [[Syria]]n and [[Egypt]]ian because it is cutting out repetitive text. As the computer sees it, it is an unnecessary use of a second "Syria" or "Egypt", when displaying the links in the latter format does the same job. Slate Vesper (talk) 00:27, March 8, 2014 (UTC)

Thanks for pointing that out, Slate. I was trying to figure out if I'd done this, since my original edit was only to fix the scrollbox, but it totally sounded like something I would do. Good to know all around.

And Dark, thanks for getting back to me. It looks like for the formatting you mentioned, we can chalk that up to the system. -Molotov.cockroach (talk) 18:49, March 8, 2014 (UTC)

Don't worry, you're not required to rush the revamp. Take as long as you need to complete your edits, and if you ever feel like you cannot commit to the revamp, you can just remove the template. Besides, anonymous users and less "experienced" editors tend to rudely ignore it most of the time anyway, which I suppose should be better enforced.

Well thank you! I appreciate it, but since the page was locked down for a while I don't want to stop people from editing it too much longer. I think I can get it done without it being an imposition. Thanks for the support, by the way--it made me smile when I saw the template, since I thought that was only something for members of the Bureau. :)

Hello, I was wondering if you would like any help on the page of Altaïr Ibn-La'Ahad. If you were I would be glad to help. Even though I'm not the most famous editor here, but I'd like to make help out the best I can. So I ask once more, may I assist you in your renovation of the Altaïr Ibn-La'Ahad page? Thank you for taking the time to read this, no matter the outcome you bring me. XXUnknownAssassinXx (talk) 07:10, March 16, 2014 (UTC)

Sorry for not responding for a bit, I was hoping to be done with the page  by now, but life has gotten in the way. I actually don't have too much more to do, so you're free to have at it once I tie up the last of my edits. That sound all right? -Molotov.cockroach (talk) 00:53, March 22, 2014 (UTC)

Yo, Molotov. I came here to request your help. Well, I am currently adding contents in the Modern times page and I was wondering if I could use your help... So are you in? Thanks.

^ And oh, can you come to the IRC to discuss this matter? Thanks. --

Bro, sorry but I did not finish adding the stuff from Initiates. Been a bit busy for my graduation day and a trip to NY. Do you mind taking over my place for awhile? I will notify you when I come back... Thanks again bro... --

I actually can't commit to the research portion of this at the moment, since I've got a pretty busy schedule myself. I can do the cleanup like we discussed, but I think it would be best that the research portion wait a bit under the circumstances. -Molotov.cockroach (talk) 05:27, April 11, 2014 (UTC)

Hey. I am now done updating things from Initiates! Well, let's work together for the wording, shall we? --

Heyo. Can you please check the tenses and the wording bro? Well, I'll be adding some pictures to it. --

Oh sorry, I didn't see this message until I'd already edited it. I went through and worked on the wording, it looks good now, and added a few pictures myself. Feel free to change them if you think others would work better. -Molotov.cockroach (talk) 04:09, April 20, 2014 (UTC)

Hey Mol, isn't the Modern times page looks nice now? Well, I came here to thank you for your service and I think this article is ready for the FA status... :) --

Yep! It's looking good I think. And hmm...maybe this one from one of the more recent Initiates entries?:

Sounds good! But where should we put it? --

It's okay. Going to remove some of the templates now... --

Hey, I nominated the page for the FA status and feel free to vote! Currently we have 2 yays and 0 nays... --

Hello Mol, good job on editing some parts of the page. I'm sorry that I left this job on you for the past month because my PC broke down and I can't edit much in mobile... So keep up the good work and let's finish this project! --

I hope you can change your mind about what can a subcategory of objects given my plan to ensure there will no longer be any and that everything will be accessible from :Category:Content. I must thank you for creating Category:Objects because you honestly cut the Gordian Knot and inspired me to plan this. The weapons could go into a "Culture and society" category but they are still objects, yes? --Alientraveller (talk) 12:06, June 24, 2014 (UTC)

I'm not really sold on the idea, but that plan does look like it could work. Perhaps get opinions on the talk page and see what the community consensus is? -Molotov.cockroach (talk) 06:29, June 26, 2014 (UTC)

I don't think Thorpe would have been very effective as a decoy if Altair could instantly recognize her to be a woman by her voice before he came to assassinate her, and given Altair's state of shock when he did discover her gender and the fact she wasn't Robert de Sable - even though I bet he tried to cover the former part up - leads me to believe that the current aspect on his page isn't entirely accurate. Slate Vesper (talk) 22:14, July 6, 2014 (UTC)

I suppose it's the way The Secret Crusade interprets it? In the game, Altaïr only seems to realize her gender upon pulling the helmet off, but then again, the assassinations in that game never quite seem to occur in real-time (Maria can be seen walking around in the memory corridor one second, then being held by the collar by Altaïr the next). I dunno, maybe it's best to go with the "game over book" thing in this case. Crook The Constantine District 22:35, July 6, 2014 (UTC)

I agree it doesn't make much sense, but that's how The Secret Crusade puts it and it isn't in direct conflict with what happens in the game--Altair is still described as being surprised when he takes her helmet off in the book, he just guessed ahead of time. I would worry about setting a precedent where we put aside certain parts of canon because it doesn't make logical sense to us, because I can see a lot of pages being changed for that reason. (The "Connor is/is not a Master Assassin" debate comes to mind.) - Molotov.cockroach (talk) 22:45, July 6, 2014 (UTC)

Retrieved from "https://assassinscreed.fandom.com/wiki/User_talk:Unrulyruby100?oldid=883393"
Community content is available under CC-BY-SA unless otherwise noted.