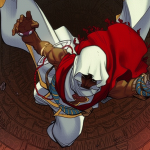 Two things. First, please note that any and all images must first be appropriately sourced with the Information template before they can be placed in an article. For that, read the Image Policy.

Second, use the preview button before committing any edits. Editing and saving the Multiplayer weapons (Revelations) article 7 times in a row as you just did stretches out both the Activity feed and the article history unnecessarily. All those edits could have easily been made in one go.

Stop changing the tense of the article. Read this wiki's policies and the Manual of style (links in the welcome message) before you continue editing here.. --

Stop promoting your blog on other blogs. If users are interested, they will comment on your blog. Keep this up and your blog will be deleted.. --

Hey there, just making sure you know that multiple edits on an article (or in your case undoing your own edits many time) is counted as badge hunting, which is not allowed. Just make sure you do it right the first time, and you wont need to keep undoing yourself :> --Fragment -Animus- 01:46, September 17, 2013 (UTC)

Hi there, I would like to inform you that blanking your talk-page is not allowed. Staff members need to be able to see if certain subjects have been brought up with you before. Thank you. --Crimson Knight Intercom 19:45, September 29, 2013 (UTC)

Would you stop committing multiple edits on an article even though some users are reverting it? One final move about your stupid behavior and you will be on your way to your second warning.

Agent, you do not even have the authority to assign warnings. If you think someone needs one, you discuss it with a Staff member or an Administrator, instead of flaunting false power. Slate Vesper (talk) 22:44, September 29, 2013 (UTC)

P.S You are also a hypocrite because you made the exact same mistake that I did and you also got a first warning.

Ummm..... no. I'm sorry, but I have no clue what you are talking about. Does it have something to do with me being of Indian descent because I was born in America and I am only half indian so I don't really know that much about Bollywood.

Hey, Raghava. This is DarkFeather, one of the Rifaq around here. Thought I'd offer you a simplified signature:

Just a thought... There are OoU pics used in the Wiki, yes, but far as I've understood it, they're pictures that have appeared in the AC franchise. Occasionally their presence might be obscure, and they might need some hunting down to be found in the canon media, like in Glyphs/Rifts, but they tend to be there; occasionally, an OoU version of an image is used due to its higher quality. If you happen to run across an OoU image, however, I'd suggest tipping off a member of the Staff/Bureau/Admins about it. Sadelyrate (siniath) 08:21, October 1, 2013 (UTC)

What if it comes from the Italian version of this wiki?

Edit in source mode, rather than visual mode.

Please note that you need to source any and all images you upload to the wiki in accordance to our image policy. For more information on how to source images, check this page. Also check the information about naming images appropriately. Badly named or unsourced images will be deleted. Feel free to reupload your deleted image with proper sourcing. Thank you. Note: this message is referring to your recent upload. nucl3arsnake (talk) 01:48, December 3, 2013 (UTC)

Also, you can scroll you mouse over your name in the top left corner, then click My Preferences. One of the tabs should say editing, and one box is checked that says "Edit in source mode"...you should deselect that box then save you setting. What that does is basicly get rid of all the span junk. Happy editing! :) --Fragment -Animus- 02:07, December 4, 2013 (UTC)

If you don't want to edit in source mode, go to "My Preferences" and then go to the "Editing" tab. Once there, you should see five options:

You have 280 mainspace edits now. The minimum edit for you to qualify is 200, so you are now eligible for the Apprenticeship...

And, oh, before I forget. When you are strolling some talk pages, don't forget that talk pages work like a mailbox and some people doesn't like other people to answer their messages. Just a friendly reminder. --

I've seen you asking people to add Pyara Kaur to Brahman's infobox, so I've gone ahead and done that for you. For future reference, that's actually really easy to do yourself :) All you need to do is go to a page that has the infobox you want on it, click on "edit", select "show list of used templates" in the bottom right of the screen and a list will appear with the templates and an "edit button" next to them. The rest is pretty self-explanatory. I hope this helped you! Crook The Constantine District 08:51, December 31, 2013 (UTC)

Hey Raghava, well the Modern times page refers to the events starting from 1900 up to the present. Would you mind if I delete that part for the search for the Koh-i-Noor and you add the modern story of Brahman with Jot Soora et al.? Thanks.

Did you ask the people on DeviantArt, whose images you've taken, if you could upload them to other sites? --Kainzorus Prime Walkie-talkie 18:19, June 7, 2014 (UTC)

I don't have a deviantart account so I can't ask them personally but if you are troubled so much by it, I will remove them from my Userpage. Raghava Shah 19:59, June 7, 2014 (UTC)

Do what you will. But DA people tend to be stingy when others just take their stuff and plaster it over the internet. --Kainzorus Prime Walkie-talkie 20:45, June 7, 2014 (UTC)

I'm editing Raza Soora at the moment and I found myself wondering about something. You are Indian, right? There's something in the Encyclopedia that I'm not entirely sure about - in it, Raza is frequently referred to as a slave, due to him being of the Shudras caste. Are people from that caste actually seen as slaves in India or just  as "servants"?

I'm not sure it matters in this case, as the two terms do overlap and Raza is treated very poorly by Hamid, but "slave" does carry a connotation with it that "servant" does not. Anyways, this is just to know whether Raza should be referred to as a slave in his biography and whether he's eligible for the "slaves" category. Thanks for reading. Crook The Constantine District 11:42, July 2, 2014 (UTC)

I'm actually born and bred in America (YEAH! MURICA), so I might not be the best to ask but to my best understanding, they are kind of like slaves in which they are paid little to none, can be traded with a gold coin, and are treated like dirt but unlike slaves, they are still citizens but once again like slaves, they don't really have the right to assemble or partake in politics (well atleast in those times).  Raghava Shah 05:13, July 4, 2014 (UTC)

Retrieved from "https://assassinscreed.fandom.com/wiki/User_talk:Raghava_Shah?oldid=566416"
Community content is available under CC-BY-SA unless otherwise noted.