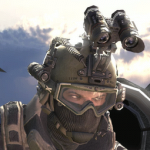 Generally we do not allow real life images with no relation to Assassin's Creed to be used, but this applies to the main bodies of articles; the history sections and infoboxes etc. You are allowed to use real life images elsewhere on the wiki (provided they are also sourced correctly; read Assassin's Creed Wiki:Images) but they really have to contribute to the article and not mess with the article's formatting. As trivia sections often contain references to real world events and people etc., having real world images in these sections only is not a problem. -- Master Sima Yi Talk 21:59, September 17, 2017 (UTC)

Hey there, I have actually been meaning to say this, but I'm actually very fascinated by your ability to trace each of the Assassin's Creed weapons down to their original source or inspiration. :) That was something I had been hoping we could do, but I was clueless as to how. You've been doing a great job, how have you managed to trace so many of them? Sol Pacificus(Cyfiero) 17:23, October 3, 2017 (UTC)

Hey Nanomat, I was wondering if you can identify the make of some the muskets in multiplayer: 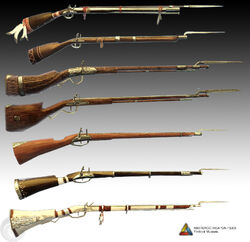 I'm not sure if most of them are just highly stylized fictional muskets. Thank you! Sol Pacificus(Cyfiero) 17:18, October 7, 2017 (UTC)

Hey Nanomat, so for the sake of organization, I'm creating an article describing duck foot pistols in general. However, I did not know what to call a general article for all the multiple-barrel pistols such as the Double-Barrel Pistol and the American Flintlock, which aren't duck feet. The name "multiple-barrel pistol" did not seem right to me because technically duck feet are multiple-barrel pistols too. So, I have mostly settled on creating an article at volley gun which covers both types in one article. I am taking this from Wikipedia's own article on volley gun which describes it as a general term for any multi-barrel gun that fires them either sequentially or simultaneously. This avoids having to explicitly name the type that fires sequentially. You can check out my draft for a clearer idea of what I mean. However, I forgot if the Pepperbox Pistol, which is not a duck foot, actually fires all its barrels simultaneously or not in the game even though its Wikipedia article says it fires them sequentially. The Wikipedia article on pepper-box pistol also confusingly says that volley guns are defined by firing all its barrels simultaneously.

Anyways, I just wanted to ask for your advice. Do you think it's a good idea to create just one page for duck foot pistols and the other kind of multiple-barrel pistol that fires its barrels sequentially, or do you think they should be separate? And if they should be separate, what should be the name for the type that fires its barrels sequentially? Can you confirm the proper definition of "volley gun"? Sol Pacificus(Cyfiero) 05:51, October 11, 2017 (UTC)

I think you misunderstand. It was never a question that we would have separate articles for every weapon, but I was also going to create a more general article for a category of weapons. This is part of my project to better organize our weapon articles.

I believe duck feet and weapons of the type which American Flintlock is an example would fall under case 2. There should be articles for each specific weapon and an article covering the weapon type in general since there are many cases of the weapon type rather than just a few. There is a specific weapon named Duck Foot Pistol which like the mace named "Mace" causes an awkward scenario where someone might expect the article to be about duck foot pistols in general rather than a specific duck foot pistol. Hence, a compromise is to have an article on both the specific Duck Foot Pistol and an article at duck foot pistol in general. However, since this is also the case for Double-Barrel Pistol, the type of weapon shared by American Flintlock, we also need a generic article for that type as well (as well as articles for each ndividual case). I was thinking, however, that perhaps the general article on the type represented by American Flintlock can merge with the article on duck foot pistols in general under the name volley gun because I don't know a proper name for the type represented by American Flintlock. But of course, we will always have separate articles for specific duck foot pistls and other multi-barreled pistols. Sol Pacificus(Cyfiero) 13:59, October 11, 2017 (UTC)
EDIT: I seem to have not applied the last case consistently since the article at corseque does read as corseques in general when under my policy, it would be about the specific corseque named "Corseque", but I will think over the last case then. Sol Pacificus(Cyfiero) 14:06, October 11, 2017 (UTC)

From my research, it seems that the terms broadsword and basket-hilted sword are refer to the same type of sword: a double-edged sword with a relatively wide blade and an elaborate guard consisting of twisting metal bars in various designs. The schiavona is a prominent example, but I wanted to ask you if you know if the Captain's Sword and Milanese Sword can also be classified as basket-hilted swords and/or broadswords. They have wide, double-edged blades and elaborate guards of twisting bars, but those bars don't cover much of the grip as it does with the schiavona. Sol Pacificus(Cyfiero) 17:31, October 19, 2017 (UTC)

Hey there is one weapon I would really like you to check if you don't mind. I have always been skeptical that the Persian Shamshir from Revelations, also called simply the Scimitar in II and Brotherhood, is actually Persian or a shamshir, much less a Persian shamshir. Could you confirm origin of this weapon? Thank you. ^_^ Sol Pacificus(Cyfiero) 01:52, October 20, 2017 (UTC)

Yeah, that was what I was thinking, but is it based on any actual scimitar in reality? Or is it entirely original? Sol Pacificus(Cyfiero) 12:10, October 20, 2017 (UTC)

Hey Nanomat, Ubisoft seems to have messed up the claymores in Unity. I wanted to ask if you could double-check if the two swords called "claymores" are actually claymores.

From what it says on Wikipedia, it seems that a claymore is properly defined by its forward-sloping quillons terminating in quatrefoils. This would mean that the Long Sword in the game, ironically not called a claymore, is the real claymore.

While we're at it, I was wondering if you could also check out the plainly named "Great Sword" and the "Bastard Sword" and what relation it may have to claymores or the swords of the first two designs.

I have been so confused over Unity's Cinquedeas for the longest time because for one thing, it seems to be a misspelling since it should be cinquedea without the -s, for another thing, it seems far too long to be considered a real cinquedea which is a short sword or a dagger. Aside from length, one can say it sure looks like a cinquedea. As such, I'm not sure if I should treat Unity's Cinqudeas as a cinquedea or just as a unique sword named after and based off of a cinquedea without actually being one. Sol Pacificus(Cyfiero) 02:48, November 19, 2017 (UTC)

Hello my resident weapons-checker :D, sorry to bother you, but among the many weapons of Origins, there is one that I was especially curious about. Can you identify the real-life origins of the Gudbrand Blade? For one thing, I'm not entirely sure what Gudbrand means; a quick search online seems to suggest its a Norwegian place name. For another, the sword's design is quite distinctive compared to other swords of this era, namely the exceedingly thin grip, but the pommel and blade are also unique to me. I'm wondering what culture made swords such as this and whether it really is Norse in origin. Thank you! Sol Pacificus(Cyfiero) 20:41, January 13, 2018 (UTC)

I'm not sure if you remember, but a while back, I asked you for help understanding the difference between claymores, zweihänders, and bastard swords. I am back to organizing our articles on weapons, and unfortunately, I am still a little unsure if I'm classifying the two-headed swords in the games correctly. I know that you mentioned that a typical feature of the zweihänder is the ricasso, the secondary grip. Complicating the matter is that even the weapon named Bastard Sword in Unity (which we currently do not have an article on) has a ricasso. We do not have an image of it uploaded just yet, but you can view it over at the French wiki here. While I'm at it, the Claymore in Unity also seems to lack the defining crossguard of claymores. I guess my question is, have they been misnamed? I currently have the Bastard Sword in Unity listed under our "bastard sword" article, but I am not sure if I should remove it if it's a misnomer after all.

Oh my apologies, I just noticed that you've already answered the question about the claymores in the past. It is only the bastard swords that we didn't discuss clearly. You said that the ricasso is not necessarily exclusive to the zweihänder as seen with the Indian "Viking's Remains" but seemed to suggest that any AC sword with a secondary crossguard as well is definitely a zweihänder. However, the Bastard Sword in Unity has a secondary grip but not a secondary crossguard. Sol Pacificus(Cyfiero) 09:04, April 19, 2019 (UTC)

Hope it doesn't bother you to constantly refer to you for questions about weapons! :) The next thing I wanted to ask is about Bartolomeo's Axe. Do you know if it can be called a labrys? And if so, would it be anachronistic? Sol Pacificus(Cyfiero) 13:57, April 26, 2019 (UTC)

Porch of the Caryatids in Origins

I saw the question you posted to Sol, and I just revisited Origins and noticed this, and can confirm: yes, the Porch of the Caryatids-model is used in Alexandria. Sadelyrate (siniath) 15:15, April 29, 2020 (UTC)

Retrieved from "https://assassinscreed.fandom.com/wiki/User_talk:Nanomat?oldid=864699"
Community content is available under CC-BY-SA unless otherwise noted.