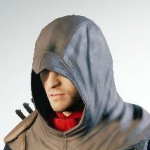 So, first of all, I will probably remove the trivia again because it's not very noteworthy. The multiplayer characters probably have 3 or 4 different set of walk animations, depending on the character's bodytype. It's not that notable that the Mercenary and the Bombardier and the Blacksmith all walke in the same manner. I hope you don't mind.

Secondly, I'd like to ask your help. We have someone else here on the wiki who often takes screenshots - however, multiplayer is not his forte. Would you mind screenshotting the various costumes of Black Flag's multiplayer characters for me? I know there's many, so if you don't want to do them all, feel free to limit yourself to Prestige, Champion and the two special ones (in the Mercenary's case, the Ivory Hunter and the Ivory Warrior).

If you want to do this for me, can I ask you to take your screenshots in spectator mode? If I remember correctly, most of the game interface disappears when the character is viewed in that mode. As well as this, please save your screenshots in png, if possible. Finally, all images need to be sourced correctly, or else they will be deleted. For information on how to source images, go here. If you need any help, just send me a message :)

That was a really good effort, but the sourcing doesn't go on the pages. Instead, the information template that you filled out needs to go in the description of the image you uploaded. I'll do one for you as an example, alright? Thanks again by the way :)

/I give Crook a sidelong glance.

That said, you'll want to crop out the UI bits, like it was done with your images of the Rebel. We generally use images devoid of any HUD elements. --Kainzorus Prime ⚜ Walkie-talkie 21:21, November 2, 2014 (UTC)

I remember asking you if you could take multiplayer screenshots and nothing came of it, so I assumed you couldn't/didn't want to. Anyways, you've got enough screens to take as it is :p I'm sure it'll be fine if Mehtih does these. Crook The Constantine District 21:26, November 2, 2014 (UTC)

Mehtih, make sure you're removing all HUD from your images. The early uploads are fine, but the Navigator, Stowaway and Orchid images all have "Ctrl" in both halves (or thirds) of the screen. Stormbeast ♉ The Helpful Place 17:33, November 4, 2014 (UTC)

Retrieved from "https://assassinscreed.fandom.com/wiki/User_talk:Mehtih?oldid=586555"
Community content is available under CC-BY-SA unless otherwise noted.