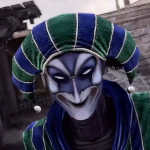 ACIII is finally here. I it is a very great game, fun to play, interesting ending, naval battles are amazin, but it seems to me as though they made it out to be more than it was before the game was out. Still going to platinum it though. :)

A few years ago my friend had bought Assassin's Creed for his PS3. As I only had a Wii at the time, this game was not available to me, in fact I did not know it to exsist. If my memory serves me correctly (no pun intended), as he let me play I was just running around Acre collecting flags. I tried to fight a few guards, but I just got myself hit a few times and handed the conroller to my friend, who actually knew how to play. Afew months later, I had gotten a PS3 of my own. Since it was one of the only games I knew, I decided to get my own copy of Assassin's Creed. I was not very good at the time, and I couldn't get past Talal. Eventually the game just sat on my shelf and started collecting dust, but I still liked it very much.

When I heard of Assassin's Creed II, I decided to get it as well. Because it had the figure among other things, I decided to pre-order it special edition with the special edition guide book (which was more for collection, I only used it if I was really stuck.) I beat the game at a slow pace, not because I couldn't go fast, but because I really wanted to enjoy the game. I didn't platinum it right away either, but I left the game with only a few misc. trophies.

When I heard Assassin's Creed: Brotherhood was coming out the first thing I went to do was pre-order it with the guide book (both special edition of course). Before it came out however, I decided to play through the fist to games again, for a recap. I actually finished the first one this time, but still didn't platinum the second. Upon getting the game I played through it and I found it fun, but not as good as ACII. I didn't platinum it because of the multiplayer trophies. However, it was around this time I platinumed ACII.

The year after, I was very disheartened to see the crappy "special edition" of Assassin's Creed: Revelations. However I still got it and the special edition guide book. I beat the game (without platinum) and found it not as good as the previous installments, but still fun to play. The multiplayer however, I found very fun and much, MUCH better than the first one.

When I got word of Assassin's Creed III, I preordered it as soon as possible in special edition. This is also the time that I wanted to get the previous two games platinumed. As all I needed from Brotherhood were most of the multiplayer trophies, I sent out a boost thread looking for help. I met two really great people who I still have chats with and play with on other games we both had. I aquired all of the other trophies, with the exception of Download Complete (reach level 50). Instead of boosting, me and my friends played game ofter game, until finally our trophies popped. I then went on to platinum Revalations, in which I only needed some assorted single player trohies. I'm still working on the DLC trophies though.

I attended the midnight opening for Assassin's Creed 3, and I just could not wait to play it. However, I opened it slowly looking at every little detail. I plan on Platinuming it as soon as possible, but that does not mean I will not enjoy it. So far I have beatened the game, and am working on challenges. I have completed the Hunters Club challenges, and am working on Frontiersmen (exploring all [or most] of Frontier took a while, but I did it).

Assassin's Creed Media I Own

1 - Unbelievable Crap (But its Assassin's Creed so I love it)

4 - Not what I would expect from AC

7 - Pretty good, it gets my thumbs up

9 - Amazing, I canjust not forgot the first time I played, watched, read etc.

Retrieved from "https://assassinscreed.fandom.com/wiki/User:Valelin?oldid=526961"
Community content is available under CC-BY-SA unless otherwise noted.