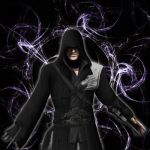 I have been a follower of the Assassin's Creed franchise since the first game came out way back when in 2007. Though I was very young, the premise of two clandestine organizations waging a hidden war and the modern day plot intrigued me. Being a huge fan of the Prince of Persia franchise, AC's similarities in gameplay with PoP was very appealing to me as well. But what really pulled me into the series, like most fans, was AC2 and it's brilliant ending. I have been a huge fan of the series ever since and I've been a member of the Wikia since 2011. You can find me lurking around the Wikia's Discord channel most of the time.

Retrieved from "https://assassinscreed.fandom.com/wiki/User:The_Black_Soul?oldid=707087"
Community content is available under CC-BY-SA unless otherwise noted.