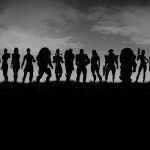 I've been playing the Assassin's Creed series since I was 18. The original AC was the first M-rated game I was able to buy without a parent (GameStop carded minors, and Amazon wasn't a thing yet). Understanding the Creed's maxim, "Nothing is true, everything is permitted," over the course of the first few games helped me to understand the nature of our world and society, which in turn allowed me to become less judgmental of others. I am now 30 years old and have been a member of Wikia for 8 years, primarily contributing to the Dragon Age Wiki, but I've also made a few contributions to the Mass Effect, Elder Scrolls, and Fallout Wikis, and I was active on two now-defunct Answers wikis.

I was content to leave the wiki in the hands of the regulars, only providing edits maybe once a year. Assassin's Creed: Odyssey brought branching dialogues, player choices, among many other RPG mechanics—much to my chagrin, I believe that true RPGs are a more proper place to explore player preferences compared to a franchise dedicated to telling historical narratives with a gameplay ethos of stealth and intrigue—so I figured my experience from the BioWare games and their respective Wikia communities would have something to offer on that front.

Thoughts on the Franchise's Future

So, I've been here over a year now, and if not for the help of several other editors wouldn't have even half the dialogue for Odyssey written out. Looking back, Ubisoft definitely prioritized quantity over quality on this front, and for the sake of Assassin's Creed: Valhalla have stated the dialogue options will be "more streamlined to fit with Eivor's personality." I can only speculate on what this means, but I hope it means less of the idea that "anything can happen in any order and have an effect on everything else" like we saw in Witcher 3. This is a historical narrative first and foremost, and each memory should have a chronology, explicit or implied.

Order of the Ancients clues

A Night to Remember (Odyssey) - Probably my most significant contribution to this wiki. Exhibit A of why "player choice" isn't always a good thing.

21st century conversations - Looked for this page for a week; adding it here so I don't lose it.

Primarily working on dialogue pages, per the "About Me" section.

Current projects are in my Sandbox. Some things I may or may not have my own saves to use to investigate, so I would greatly appreciate any help filling in these gaps.

The following items refer to formatting conventions I've settled on and adapted to across over a year of writing out dialogue:

In the end, I'm not picky about the final presentation. I just felt this was the most sufficient way to juggle the past-tense presentation of articles as scripts of protagonists' memories with the newly-realized (very) obvious way in which players are/were called on to influence the memory's progression. It seems everyone else has already settled on a similar workflow, and much of where my conventions began were based on what I've observed from work that came before.

To make sub-layer tabs within other tabs beyond a factor of 2, add another #tag:tabber| bracket under the text where the dialogue forks again. The numerics used in the example reflect how the order looks in hypertext code, whereas the sub-option lettering shows how the tabbing will look on the page. It gets easier to mentally separate the flow of a conversation once it has unique lines preceding it, but hopefully the dialogue branching in Valhalla will be more streamlined, as the developers have claimed so far, making this cheat sheet moot post-Odyssey.

Retrieved from "https://assassinscreed.fandom.com/wiki/User:RShepard227?oldid=872902"
Community content is available under CC-BY-SA unless otherwise noted.