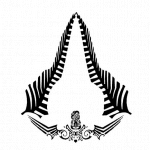 On the off-chance that someone reads this... (If you do, please tell me, just out of my own desire to see if anyone will actually do so)

My interest in the Assassin's Creed universe began when an otherwise unnotable relative gave me a copy of Assassin's Creed for my birthday a few years back. I was entranced the moment I started playing, loving the tale of a creepy corporation, a disgruntled bartender, and his eyewateringly deadly great-grand-something. The plot twist at the end left me completely, irrredeemably, stunned.

What with life, the universe, and a bunch of other stuff, I lost track of Assassin's Creed until late 2010, when I- on a strange whim- excavated my bank account to buy Assassin's Creed 2. It was as epic as I had hoped it would be, leaping, slashing and gondola-stealing my way through a twisted web of vengeance.

After perfecting my one-two combo on the most powerful man in the Western world, I waited in a fevered daze for a year or so for Brotherhood to come out. I was- mostly- not disappointed. I thought the story was solid and enjoyable but unremarkable- with the exceptions of Cesare Borgia and the Da Vinci Disappearance DLC. Gameplay-wise, the combat was great looking and fast paced but at times felt almost too effortless- there weren't many generic enemies that couldn't be defeated with three seconds of manic key-tapping, with the honourable exception of the Papal Guards.

As for Revelations, I didn't think it was that bad. It just wasn't especially good. The campaign felt too, too short and felt like it was designed to string a series of gimmicky, Uncharted-style ideas together. I also have no idea why Desmond's face model was changed. On the plus side, I found delving into Desmond's memories pretty interesting and the gameplay was improved significantly- the Janissaries were tough enough that I actually died. Occasionally. The hookblade was also decently useful. Oh, and as someone who has studied (not particularly well) Plato's Phaedo, recovering Socrates' version of Aesop's fables made me smile.

Outside of the Creed, my hobbies/interests include, in no particular order, Great Literature, writing, soccer, running, philosophy, history- especially Roman and Cold War periods. I am utterly useless at maths- except mental arithmetic- but am pretty darn good at English. I am/was writing an apocalyptic-ish novel but have put this on hold after (I think) 7,000 words. My favourite writer is Haruki Murakami and his slinky surrealism, though my current favourite novel is Julian by Gore Vidal, my tastes in music include Moby, Miles Davis, Ahmad Jamal, Pat Metheny, Hugo, Neil Young, Nick Drake (I know, I know.... strange tastes for a teenager), Steely Dan and Gorillaz.

Well, I have just taken over from Animusradiation as the wiki's reigning trivia champion. If you fancy yourself, prepare for a battle on the IRC...

2 weird/interesting things about me:

1. I own two signed copies of Michael Palin's travel books. It's true- he really is Britain's Nicest Man.

2. I was one word away from going to the Scripps National Spelling Bee. The word? Well... still a sore point. Though perhaps later.

If you come from NZ, please get in touch. It's a lonely internet out there.

Retrieved from "https://assassinscreed.fandom.com/wiki/User:HugCar?oldid=403790"
Community content is available under CC-BY-SA unless otherwise noted.