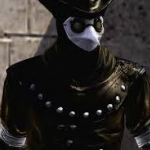 aka I don't know.

(Please note that I am fairly new to this wiki, and obviously I am bound to make some mistakes in the future) I am simply a gamer, I have been a loyal playstation player since the ps1, and I  plan on sticking with it for as long as they keep making consoles. Some of my favorite games include, Assassins creed(the first game would have to be my favorite because thats what got me into the wonderful series.) Skyrim, Mass effect, Fallout, Borderlands, War In The North, Dishonored, Demon Souls, Dark Souls, The Last Of Us, Crysis, Killzone, and tons more, I have a pretty hefty collection of over 150 ps3 games, 50 ps2 games, and 20 ps1 games, Feel free to request my psn and we can play whatever you want, (considering I own it)My first game I ever played on my ps1 was Crash Bandicoot, the first game I played on my ps2 was the first Ratchet and Clank game, the first game I played on my ps3 was The Elder Scrolls Oblivion.  Another thing about me is that I am a fan of the book series, Game Of Thrones which is amazing and you should check it out if you haven't already.  I also watch The Walking Dead, American dad, Robot Chicken, Squidbillies, Family guy, Breaking Bad, King of the hill, and other shows, mostly on adult swim. My favorite Films are Rubber, Which is a film about a tire that kills people(Watch a video of it on youtube) Zombieland, I am legend, Rambo first blood, The saw films, Hostel, The bone collector, Gran Torino, Gladiator, and more. I have a very great interest in Plague Doctors, which you probably can tell, and my favorite area in history is the Renaissance, I find it very interesting, Oh, and one last thing I forgot to mention, I am getting Destiny, Assassins Creed Black Flag, Dying Light, and Call Of Duty Ghosts, Maybe the new Killzone but I'm not sure yet, It looks good but I would rather spend my money on something I know I would like, the first three Killzones were good, but for whatever reason I have my doubts on the newest one, if my friends like it, then I'll pick it up most likely.

Retrieved from "https://assassinscreed.fandom.com/wiki/User:Doctor_Malfatto?oldid=506049"
Community content is available under CC-BY-SA unless otherwise noted.