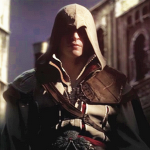 My name is Justin, I live in Perth, Western Australia and I've been an avid fan of the Assassin's Creed series since early 2010. I play on the PlayStation 3 and have all the Assassin's Creed games to date. My PSN Screen Name is justinriley11. Feel free to add me, but let me know who you are first.

Well let's see, I play guitar, drums and I sing, I'm not very athletic but I'm not lazy either, I enjoy gaming, watching movies, reading and exploring the internetz.

I don't do much on here except gather information for my personal gain, and partake in discussions towards the AC Universe. I edit every now and then, but mostly I'm just here to share what knowledge I have.

I currently have no Fanon stories in preparation, but I have inklings of ideas, most likely to do with the Three Guardians of Northern Italy (see above), and how their stories interweve with each other and with that of Ezio Auditore. For now, you can read from their Fanon pages.

My ideas for the future of Assassin's Creed:

I've been thinking a lot recently on what kind of scenarios, settings and time periods that I would like to see explored in the future. Basically, there are three I would find super interesting.

This would be interesting in many ways. New weapons would include an increase in the use of guns (like we'll probably see in AC III) and many new gameplay features that I can see being incorporated. Also, how kick-ass would the robes look? Just imagine them.

It could even turn out that the famous Sherlock Holmes is real, and aids our protagonist in the way that Da Vinci did Ezio. Not only that, he'd be an awesome fighter, if we go by the Robert Downey Jr. representation. I can see Victorian England being a great setting.

Cleopatra a Templar? Easy enough concept. Mind you, it was touched on in Assassin's Creed II, when in the Sanctuary, there is a statue of the Egyptian Assassin Amunet (who killed Cleopatra using a venomous asp). Maybe you could play as her and this would be our first time playing as a female Assassin, which I am happy to see happen.

I'm not sure how free-running would happen in Egypt though. Still, it is every bit worth the consideration.

I still need to read up a bit more on this time period and what was going on during it, to make a statement, but a lot of other people I've seen have been very keen on something in Japan taking place.

Retrieved from "https://assassinscreed.fandom.com/wiki/User:AssassinOfAus?oldid=307981"
Community content is available under CC-BY-SA unless otherwise noted.