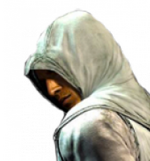 I'm married to member Maria Thorpe and we live together in Belgium though she herself is from Scotland. We walked in Ezio's footsteps by going on a honeymoon in Firenze and Venezia, visiting most locations seen in Assassin's Creed II. I learned about my ancestor. He like Ezio, served the Medici family, however he served them at their court. It's said that he was actually a poisoner, which is interesting imo. I wonder if he poisoned people with a hidden blade, but I have my doubts about that.

I like to work with Photoshop, including manipulations of Assassin's Creed.

Combining the infamous Assassins together. 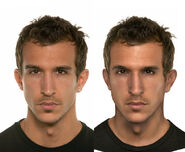 Artwork on Deviantart made by Kerembeyit. 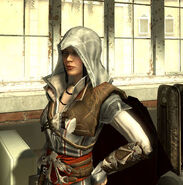 Photomanip I made of Al Mualim

Me on top of the Santa Maria del Fiore.

A very skinny doctor in Venice
Altaïr 4.jpg
Photoshopped picture of Altaïr using Francisco Randez' face and a cosplayer's body.
Add a photo to this gallery
Retrieved from "https://assassinscreed.fandom.com/wiki/User:Alta%C3%AFr?oldid=484157"
Community content is available under CC-BY-SA unless otherwise noted.