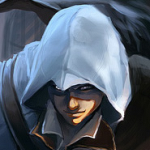 Hello, amici! I am Aegis Runestone; though, I prefer to be called "Aegis." I am a relatively new member to the Brotherhood. My brother introduced me and my friends to AC1 back in 2007. We loved it, but I didn't have an Xbox 360 back then; therefore, I couldn't play it for myself. Fast forward to March, 2011, and I have an Xbox 360, AC1 and AC2. I played them back-to-back, and Assassin's Creed 2 has claimed the spot of my second favorite game of all time (my favorite game of all time being Final Fantasy 4). I also own AC Brotherhood, and AC Revelations.

I'm a member of the Church of Jesus Christ of Latter-day Saints (Mormon), feel free to ask me questions as long as they aren't inflammtory, threatening, or flamebaiting. I'll do my best to answer any questions you have (here's my profile on Mormon.org).

I'm also a writer and web designer. I'm going to graduate from Brigham Young University in December 2013 with a degree in Technical Engineering Education (TEE), and a minor in Computer Science.

As for music, I'm a total geek. I love video game and anime music. I'm not very fond of "real" music.

I'm also a writer; I'm planning an original story based in Renassiance, Italy (similar timeframe to AC2 and Brotherhood) called The Vampiress of Italy. It starts in 1461 and ends in either 1504 or 1514 (depending on if I split it into two books or not) with a young, and very beautiful girl named Crimra. She is bitten by a vampire and turned into one against her own will. As a vampire, she has to learn how to live as one without harming innocents.

My story uses traditional vampire lore with some twists and a new magic system. There are no sparkling vampires--the sun murders them, and there will be no teenage angst (despite the fact that Crimra is 15 when she is bitten). Though, at some point, she does find a way to live in the sunlight, and I promise it won't involve sparkles.

As for writing around here; check out my Assassin's Creed Fanon! Assassin's Creed: The Legendary Hero, which won the May 2012 Featured Fanon award! I'm very grateful to everyone here for it!

My favorite fictional character of all time is Sasami Masaki Jurai. (Image drawn by DaYo). I love her because of her kind, sweet, generous, and loving personalty. She has a slight streak of mischief, which is always fun. Overall, though, I like her because of said personalty traits.

My favorite video game character of all time is Cecil Harvey; the main character of Final Fantasy IV. Cecil is an inspiration; he turns from his dark ways and seeks repentance, and he finds it. At Mt.Ordeals, he becomes a Paladin, but that's not the end of his redemption. He must learn to forgive others and have the courage it takes to save his world. And he learns those things, and for that, I admire him. He's the manliest video game character in terms of personalty (in my opinion), yet not in looks.

Asassassin's Creed Media I Own

"As promised, I edited the title to Red to fix the issue you noticed. I don't like the way I positioned the title though, it's really bothering me. I'm not going to go and edit it again however, making it was challenging enough, sourcing it was also a pain in the ass, and editing it again wasn't too much trouble but I don't want to edit it a third time." - SurpemeAssassin

I really like this picture, and I'm honored to have it on my infobox.

This infobox over there was inspired by SupremeAssassin's infobox. Credits go to: Kabustu also to GI and Crimson for the help of stylizing SurpemeAssassin's Infobox. Credit for the complex coding goes to: Stormbeast

These are not in any particular order.

Retrieved from "https://assassinscreed.fandom.com/wiki/User:Aegis_Runestone?oldid=458181"
Community content is available under CC-BY-SA unless otherwise noted.