"The Korinthians, inventors of the trireme, just sent their new ship, the Tyrant, on its maiden voyage. Rumor has it this ship will redefine Spartan naval warfare. Someone should test that theory."
―Description of the ship on the message board[src]

The Tyrant was a Spartan trireme which traversed the Aegean Sea during the Peloponnesian War. It was a type of new ship designed by the Korinthians for their Spartan allies.

Sometime between 429 and 422 BCE, the ship was destroyed by the Adrestia, a trireme commanded by the Spartan misthios Kassandra. Kassandra claimed the sails and finery of the Tyrant for her own.[1] 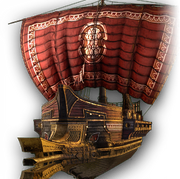 The design of the Tyrant
Add a photo to this gallery

Retrieved from "https://assassinscreed.fandom.com/wiki/Tyrant?oldid=936006"
Community content is available under CC-BY-SA unless otherwise noted.