Tutankhamun (c. 1341 BCE – c. 1323 BCE) was a pharaoh of the Eighteenth dynasty of Egypt, during the Amarna Period. He was the son of Akhenaten, whom he eventually succeeded.

Upon his ascension as pharaoh, Tutankhamun inherited his father's Apple of Eden, known to him as "the Aten"; the focus of Akhenaten's monotheistic religious worship, and a physical manifestation, of Aten.[1]

Instead of continuing his father's monotheistic beliefs, Tutankhamun instead decided to restore the old Egyptian gods to prominence and passed the artifact to the priests of Amun, entrusting them to use it so as to maintain Ma'at; order and justice for the Egyptian people. After his death, Tutankhamun's spirit subsequently inhabited the Duat.[1]

In 38 BCE, Tutunkhamun's spirit, alongside those of his father and the Great Pharaoh Ramesses II were seemingly returned to the world of the living by the God's Wife of Amun, Isidora, who had possession of the Aten.[1]

Now residing in the Duat, an aspect of the Egyptian afterlife, Tutankhamun was confronted by the Hidden One Bayek of Siwa, who managed to gain access to the Duat through a portal connected to the pharaoh's tomb.[2] 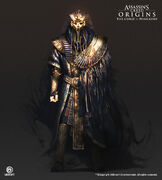 Tutankhamun during his reign

Tutankhamun giving the Apple to the priests of Amun

Tutankhamun owned an iron dagger made from a meteorite.

Although he is portrayed as being significantly taller than Bayek and powerful, the real Tutankhamun was a physically disabled teenager with a spindly build.