The Trickster (harvested from: Mirela Djuric) was an Animi Avatar used by Abstergo Industries to train the recruits in the second stage of their Animi Training Program. Her specialty weapon was a dagger.

The Trickster had several unique moves:

Casually walking up to her target, the Trickster brutally kicks them in their right leg, destabilizing them, before she unsheathes her dagger and slashes them across the torso, finally impaling them in their spine. From there, she stores away her dagger and watches as her victim collapses to the ground.

Quietly approaching her target from behind, the Trickster stabs her dagger into their back, and before they can react in any way, she spins and slashes their newly inflicted wound. Severing the spinal nerves, the movement makes her victim fall back, paralyzed and dying.

Rushing up to her target, the Trickster savagely stabs them in the stomach with her dagger, and as they clutch their wound, she removes her weapon and spins around rapidly on the soles of her feet, using the momentum to slash their throat. With this, her victim clutches at their throat and collapses to the floor, dying of blood loss.

Running up behind her target, the Trickster unsheathes her dagger, before she vaults around them and presses her weapon into their neck, making her weapon slit through their throat as she pulls them along with her. Once her feet touch the floor, she quickly withdraws her dagger from her victim's neck, causing them to twirl around to their bloody end.

Grabbing her seated target's foot, the Trickster drags them off the bench, until their head rests against it. Before they can do anything to defend themselves, she forcefully kicks them in the face, violently sending their head backwards and breaking her victim's neck on the bench behind them.

Leaping from above, the Trickster unsheathes her dagger in mid-air, before landing on her target. As she crashes into them, she plants her blade into the side of their head, fatally impaling their brain. With her victim laying dead on the floor, the Trickster stands up and stores her dagger back at her waist.

The Trickster could be customized in several ways: 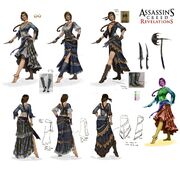 Customization concepts for the Trickster

Concept art of the Trickster

The Trickster watches the Sentinel shoot the Deacon, with known characters in the background