Assassin's Creed Wiki
Register
Don't have an account?
Sign In
Advertisement
in: Articles that need updating, Economy, Objects,
and 10 more

A treasure chest is a chest filled with treasures. Such containers could be found in a variety of locations when reliving genetic memories through the Animus or a similar device.

During the Peloponnesian War in ancient Greece, the Spartan misthios Kassandra explored numerous locations containing chests of variable value. The most valuable, and also tending to be the best guarded, were the chests containing the wealth of the region. Occasionally, Kassandra also discovered chests containing legendary weapons, like the war-hammer which had allegedly belonged to Jason, a hero in Greek mythology.[1]

Chests in banks were protected by four armed guards, but those scattered inside cities were usually unguarded, or protected by only one or two guards. Those outside of cities however, such as in the Apennine Mountains, were not guarded at all. In Rome and Constantinople, though not usually directly guarded, nearby archers would attack Ezio if they saw him opening chests on rooftops.[2][3]

Renaissance banks typically contained two chests, and while they were always guarded by three or four men outside the doors, more guards usually patrolled nearby. Rebecca Crane once stated that although all families owned banks, the Pazzi family owned the most by far, and that breaking into them would be worthwhile. However, guards affiliated with the House of Borgia were assigned to attend the banks containing Codex pages.[2]

Art merchants also sold treasure maps that marked the locations of the chests in an entire city, or in one of its districts, with the maps varying in price. They costed between 150ƒ to 395ƒ in the city of Florence, 150ƒ in the Appennine Mountains, 285ƒ in Monteriggioni, 175ƒ to 240ƒ in Tuscany, 235ƒ to 260ƒ in Romagna, and 485ƒ to 995ƒ in Venice.[2]

During the early 18th century, the pirate Edward Kenway located a significant number of treasure chests, both guarded and buried, throughout the Caribbean.[4] Later, Edward's son, Haytham, and grandson, Ratonhnhaké:ton, also found chests located throughout New York, Boston, and the Frontier. However, these chests differed from those in Renaissance Italy by the fact that they required lockpicking to access their contents.[5]

Certain treasure chests were guarded by dogs. Ratonhnhaké:ton could lure them away using hunting bait, or kill them. Accompanying this, maps that detailed the chests' locations could be purchased from general stores.[5]

During the French Revolution, the Assassin Arno Dorian located chests, usually guarded and locked, scattered throughout Paris, Versailles, and Franciade. [6]

Aside from money, chests found in Rome could also contain a variety of trade items. These could later be sold to shops, or traded for other valuable items or equipment. They could vary between common objects, such as jars of leeches, or valuable jewelry.[3]

Chests could also be found in the many lairs of Romulus. Aside from money and valuable items, one special chest per lair could be found in its shrine, which contained one of six keys that unlocked the door to the Followers of Romulus' greatest treasure.[3]

Chests in the American colonies contained recipes for items that could be crafted by the artisans in the Davenport Homestead. Scattered across the colonies were small trinket boxes which Ratonhnhaké:ton retrieved for the sailor "Peg Leg" in exchange for letters from William Kidd, helping him locate the map to Kidd's treasure.[5] 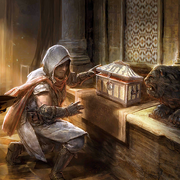 An Italian Assassin opening a chest 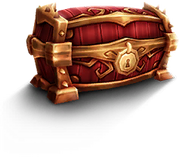 A chest during the Reconquista

Aguilar's Apple and the chest it rested in

Aguilar's Apple in a metal chest covered in Templar crosses