Tosha Khana was a temple built by the First Civilization, located beneath Maharaja Ranjit Singh's summer palace. The temple was used by the Maharaja to store the Koh-i-Noor diamond, a Piece of Eden.[1]

In June 1839, the temple was infiltrated by the Assassin Arbaaz Mir and his mute servant Raza Soora to find the Koh-i-Noor. After walking through the hall of the temple adorned with statues apparently depicting members of the First Civilization as Hindu gods, they found the artifact held by a statue of Durga and retrieved it.[1]

In 1841, the temple was infiltrated by Templars under the command of Master Templar William Sleeman, who had stolen the Koh-i-Noor.[2] At the center of the temple, he used the artifact in conjunction with a Precursor box, which then revealed a map pointing to another temple in Afghanistan. When Sleeman was confronted by Arbaaz Mir, the Templar shot at him, disturbing the complex leading to its destruction.[3] 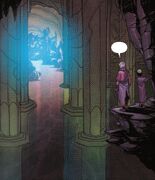 Arbaaz Mir and Raza Soora at the entrance to the ruins 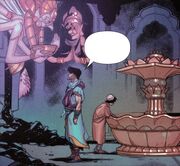 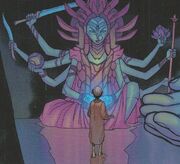