Assassin's Creed Wiki
Register
Don't have an account?
Sign In
Advertisement
in: Articles in need of sources, 1420 births, 1498 deaths,
and 13 more

"You dare to lecture me? I am the hammer of heretics, the light of España, the honor of my order. I follow none but God's command."
―Torquemada to Ezio Auditore da Firenze, 1492.[src]-[m]

Tomás de Torquemada (1420 – 1498) was a Spanish Dominican friar, the first Inquisitor General of Spain, confessor to Queen Isabella I of Castile, and a Master Templar of the Spanish Rite of the Templar Order.

Under influence of Rodrigo Borgia, Papal candidate and Grand Master of the Italian Templars, Torquemada opposed the Spanish Brotherhood of Assassins, persecuting them as part of the Reconquista.

In 1491, Tomás de Torquemada served Cardinal Rodrigo Borgia, whom he greatly admired, so much so that Rodrigo provided him with a list of names of people who had to be executed. Believing them to be heretics, Tomás had his men capture and prepare them for execution; Torquemada was apparently oblivious to the fact that Rodrigo Borgia had used him as a tool to kill the Spanish Assassins.[2]

However, the Assassins Ezio Auditore da Firenze and Raphael Sánchez attempted to prevent the executions and killed Gaspar Martínez, who was to oversee the first of such on an Assassin in Barcelona.[2]

Sometime later, Torquemada visited Pedro Llorente, the Inquisition's calficador, in Zaragoza; here, the two men oversaw the execution of another of the Assassins. However, Ezio Auditore overheard their conversation and discovered that the names had been provided by Rodrigo Borgia,[3] causing him to decide on assassinating Pedro Llorente as soon as Torquemada had left.[4]

Despite Ezio's later assumption to the contrary,[4] Torquemada was in fact a member of the Templar Order, being a Master Templar of the Order. With the help of his henchman, the fearsome Ojeda, Torquemada later continued to use the Inquisition to root out those who opposed the Templar agenda, manipulating the Christian faith for his own gain. To accomplish his mission, Torquemada favored the auto-da-fé, public executions during which "heretics" were burned at the stake. At some point, the Templars captured the Assassins parents of Aguilar de Nerha and executed them, prompting the Spaniard to join the Brotherhood.[5]

In 1492, after Torquemada discovered that an Apple of Eden was entrusted to the besieged Sultan of Granada, Muhammad XII, the Templar decided to kidnap Muhammad's son, Prince Ahmed. Torquemada's plan was to force the Muslim monarch to surrender to the Christian kingdoms and to give the Apple to the Templars in exchange for the life of his son. Later, as Ojeda and General Ramirez captured the Prince in the village where the young boy was hidden by the Assassins, the Templars were ambushed by a team of Spanish Assassins led by their Mentor, Benedicto. However the Assassins failed and were all killed except for the Mentor and two other Assassins, Aguilar and María.[6].

The Assassins who had been thrown into a jail in Seville were dragged out of their cell to be publicly executed as heretics by the Inquisition. Presiding over the auto-da-fé, Torquemada made a speech about heresy, presenting the Assassins as enemies of peace and defenders of discord before sentencing them to death in front of a cheerful crowd. While the Assassin Mentor was burned at the stake by the Templars, the two other Assassins freed themselves and after killing several Templars and blowing up the stage with oil, fled under the eyes of an enraged Torquemada. Eventually, the Assassins escaped the arbalists that Torquemada had stationed on the roofs near the execution site as well as Ojeda and his men by performing a Leap of Faith from the Seville Cathedral.[6]

Later, in Granada, Torquemada and his Templar army took possession of the Alhambra and confronted Sultan Muhammad. With his Assassin protectors dead and his son in the hands of the Templars, the defeated Sultan led them to the room where the artifact was hidden and relinquished the Piece of Eden to the Grand Inquisitor, who in turn released the young prince. As Torquemada held up the Apple in victory, Aguilar and María commenced their attack and locked the door of the room, trapping the bulk of the Templar's forces outside.[6]

Using smoke bombs, the Assassins swiftly killed the soldiers present in the room, save for the Master Templar and his giant henchman. As Aguilar seized the Apple and was about to kill Torquemada, the Assassin discovered that Ojeda had his lover's throat under his blade. However, to prevent Aguilar from giving the Piece of Eden to the Templars to save her life, María killed herself with Ojeda's blade. Enraged, Aguilar pushed Torquemada on the side and engaged in a vicious brawl with Ojeda, eventually killing him.[6]

Having witnessed his champion vanquished by the Assassin, Torquemada took advantage of Aguilar's distraction to open the locked door to the rest of his men. After fleeing through a tunnel under the room, Aguilar escaped his Templars pursuers only to be surrounded by Torquemada and his men on a bridge over a deep ravine. The Templar, believing himself to have won, pressed his foe to surrender and to give him the Apple but Aguilar instead jumped into the ravine, disappearing into the river while Torquemada cursed the Assassin with an angry roar.[6]

In the aftermath of the fall of Granada to the Spanish, Torquemada acted swiftly in dispatching Inquisitor Juan de Marillo to round up all heretics in the city. This operation failed when Ezio rescued many of these condemned citizens before proceeding to assassinate Juan in the city's sewers without anyone noticing.[7]

Soon after Christopher Columbus set sail for his first voyage,[8] the Inquisitors, under the manipulation of the Templars, sent soldiers to kill the Assassins Luis de Santángel and Raphael Sánchez in retaliation for foiling their plans to stall the expedition.[9]

For this outrage, Santángel ordered Ezio to eliminate Torquemada once and for all, retracting a previous command against it. Despite this, Sanchez advised Ezio to make sure to figure out the extent of Torquemada's association with the Templar Order before going for the kill, and whether or not he was a Templar himself.[10] Accordingly, when Ezio infiltrated Torquemada's heavily-guarded estate and at last reached the Grand Inquisitor, he confronted him directly, hoping to goad him into divulging his allegiances.[11]

Torquemada boasted of his glory in the eyes of God, and jeered at the prospect that Rodrigo Borgia, whom he admired, was actually an atheist. Through this, Ezio incorrectly concluded that like Pedro Llorente before him, Torquemada lacked any knowledge of a Templar conspiracy and was merely an extreme, religious fanatic possessed by self-delusion. In spite of this, the Assassin remained keen on neutralizing him and charged in for a swift kill, but Torquemada had been well prepared. He immediately lowered a portcullis between them to obstruct Ezio's approach and managed to escape unscathed.[12]

Obtaining the Shattered Staff of Eden and death

In the years that followed his assassination attempt, Torquemada disappeared from the public eye. Through his allies Gustavo Ramírez and the Assassin turncoat Diego de Alvarado, he had gathered all three pieces of the Shattered Staff of Eden.[13] Although he made no overt uses of the Staff, his Inquisition increased its presence within Spain. By 1498, he fortified himself within the Monastery of Saint Thomas Aquinas in Ávila.[14] After weeks cowering in the monastery, On 16 September 1498, the Spanish Assassin Brotherhood led an assault on the monastery with the aid of mercenaries. Torquemada conjured an illusion of a soldier to hold the Assassins back while he fled further into the monastery.[15] Below the monastery was an ancient Isu forge that Torquemada had discovered beforehand, he summoned more phantom soldiers to protect him while he made his way deeper into the forge. Torquemada was eventually cornered and killed by the Assassins.[1]

His work as the Grand Inquisitor was not undone as the Assassins had hoped, as he was quickly replaced by Diego Deza.

Crawford Starrick, Grand Master of the British Templars around 1868, owned a portrait of Tomás de Torquemada.[16]

Details of Torquemada's assassination were later collected by the Assassin Clay Kaczmarek in 2012, and hidden in the Animus in Glyph puzzles for his successor, Desmond Miles to find. Which he did in September of that year.[17] Desmond solved this puzzle, which was part of a set titled "Guardians" where Torquemada was included in the list of people of power assassinated.[18] 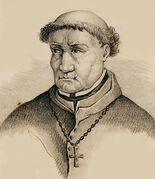 A portrait of Torquemada