Thucydides (c. 460 – c. 400 BCE) was an Athenian historian and general during the Peloponnesian War.

In May 431 BCE, Thucydides attended a symposium hosted by Perikles. The Spartan misthios Kassandra also attended the symposium, and observed Thucydides talking to a group of military men. Some time later, Thucydides and his companions were approached by Hermippos who engaged them in conversation. Unbeknownst to the group of men, Hermippos had laced the wine with poison, specifically for Kassandra to drink. He stood and continued to talk to the men, all the while observing Kassandra pouring herself a cup of wine. However, after Kassandra appeared unaffected by the poison, Hermippos' expression soured and he left the group.[1]

Around 430 BCE, Thucydides was mentioned in a conversation between Kassandra and a priest of Asklepios Timoxenos when the latter criticized modern writers in general for striving for realism in their works.[2]

In the winter of 424 BCE, Spartan forces had began moving in on Amphipolis, Thucydides was sent there to fight for control over the city. However, by the time he arrived, the city had already been taken. For the loss of Amphipolis, Athens held Thucydides responsible and exiled him.[3] Thucydides remained in exile even two years later, when the Periklean Circle reconvened to fight Kleon, and was thus unable to attend the meeting nor provide assistance.[4]

Thucydides was considered a great soldier and leader, although he envied Herodotos as he would rather be writing histories like him.[1] 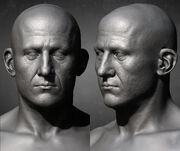 Head models of Thucydides
Add a photo to this gallery

Retrieved from "https://assassinscreed.fandom.com/wiki/Thucydides?oldid=870460"
Community content is available under CC-BY-SA unless otherwise noted.