Thor was an Isu who was later revered as the warrior god of lightning and thunder in Norse and Germanic mythology, which gave him the title "Lord of Storms". The son of Odin and Jörð, and husband of Sif, he was a member of Æsir from Asgard and the wielder of the Mjölnir, an Isu artifact capable of generating weaponized electricity.

In Norse mythology, he was the archrival of Jörmungandr, the giant serpent that encircled Midgard whom he was fated to be mortally wounded by its venom-infused last breath just after killing it during Ragnarök.

In addition to being known as Thor, he was also called Thunor by the Anglo-Saxon pagans.[5]

As the Great Catastrophe approached, Thor and the other eight Norse Isu uploaded their DNA data into Yggdrasil to be later redistributed into the human gene pool.[6] Millennia later in 790 CE, Thor was successfully reincarnated as Halfdan Ragnarsson.[4]

Thor had a totem named after him in the popular dice game Orlog, played during the 9th century. The piece "Thor's Might" would damage an opponent's life points by a percentage. The piece was fairly common as all players had one in their possession.[7]

During the 10th century, the night before Styrbjörn the Strong was to go into battle against Harald Bluetooth, one of his Jomsvikings made an offering to Thor and claimed to have been granted a vision of Styrbjörn sailing home with Harald tied to his mast.[8]

Thor's statue during the Sigrblot festival in Ravensthorpe 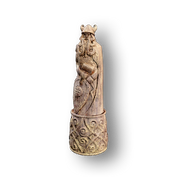 A toy of Thor based off his Sigrblot statue