Assassin's Creed Wiki
Register
Don't have an account?
Sign In
Advertisement
in: Articles in need of sources, Individuals, British people,
and 6 more

"Consider your origin... you were not formed to live like a brute... but to follow virtue and knowledge."
―Tom's father's last words from Dante's The Divine Comedy.[src][[ [citation needed] |-[m]]]

Thomas "Tom" Stoddard was a Master Assassin of the Assassin Brotherhood, well-known for being a tracker of Pieces of Eden. One of his assignments, in 1692, was locating an artifact in the town of Salem, amidst the Salem witch trials. He is a descendant of 16th century assassin Hiram Stoddard and is also an ancestor to 21st century Assassin Charlotte de la Cruz.[1]

In June 1692, Stoddard arrived in Salem Town after travelling from London on assignment to locate a Piece of Eden.[1] After witnessing the hanging of Bridget Bishop,[2] he went to meet with his contacts in the city, who turned out to be Templars in disguise. He was then joined by his real contact, Jennifer Querry, who explained the history of the strange 'illness' that had been plaguing Salem, and the involvement of the Templars Samuel Parris and William Stoughton.[1]

The two Assassins later infiltrated a warehouse in order to track down the Piece of Eden. Finding a dungeon underneath the warehouse, Stoddard was forced to free a young girl named Dorothy Osborne and a mute boy named David, with the latter's promise to lead the way to the artifact's location. Unconvinced, Tom threatened Dorothy as he pushed the mute boy away. Jennifer and Dorothy eventually managed to calm him down. However, Dorothy suddenly fainted and recited Tom's father's last words from Dante's The Divine Comedy. As Jennifer went to the young girl's side, Stoddard had to defend the trio from an onslaught of attackers.[1]

Querry eventually discovered an exit and Stoddard set the basement aflame as they escaped to the swamp. Seeing Querry's inability to carry the mute boy, Stoddard told David to go to Ipswich for a man named Arbour and gave him a feather. Querry disagreed and Stoddard tried to explain that the boy was slowing them down and endangering Dorothy's life, to no avail. However, there was a loud bang and Stoddard saw another wave of attackers. He was forced to leave an injured Querry and David for the girl's life.[3]

Dorothy, again possessed, revealed herself as Consus and spoke to Charlotte de la Cruz who was reliving Tom's memories. Confused, Stoddard questioned Dorothy but the girl was back to herself. She told him that he would have a family and blamed him for leaving Querry and David. The pair eventually reached the dock and Stoddard was surprised to see Templars arrive.[3]

Querry suddenly appeared and told him that she left the boy for Tom's greater good. Thinking that she was lying, Stoddard attacked her as Dorothy tried to defend Jennifer from him. However, they were suddenly assaulted by Templars who followed Jennifer and tied them up.[3]

William Stoughton then tortured the two Assassins for information. When Stoughton threatened to hurt David, Querry ignored Stoddard's command to stay silent. Consus once again possessed Dorothy and as the Templars were distracted, Jennifer took the opportunity to kill a guard and free Stoddard. However, she was shot dead before she could free David. Stoughton also shot Stoddard in the arm and revealed to him that he would use the captured women to replicate Dorothy.

Overcome with guilt, Dorothy decided to kill herself in the fire which enraged Stoughton. Before the Templar could shoot Stoddard, his accomplice Samuel Parris interfered and shot Stoughton instead. Expressing his thoughts about unneeded violence in the Templars' part, he let Stoddard and David go when Stoddard quoted Dante's Divine Comedy.[4]

Stoddard, now a changed man, buried Dorothy and Jennifer and took the orphaned David as his own child. He then realized that Jennifer was actually David's own mother. After this, he offered to teach David how to read and offered him his copy of Dante's The Inferno.[4]

The son of a harsh farmer, who taught to his son to respect the rules above any personal considerations,[3] Tom Stoddard grew into a cold and tough individual, keeping his emotions to himself.[1] He was not one to abandon a mission in order to help someone in need and was considered as one of the most ruthless Assassins in his time. Capable of threatening the life of a little girl to obtain what he was tasked to acquire, Tom was nevertheless a strong follower of the Creed and while conflicted about it, he avoided to kill innocents even if they were directly threatening his life.[3]

Stoddard was an exceptionally skilled freerunner capable of scaling the buildings of Salem.[2] He also proved to be skilled in unarmed combat, easily incapacitating an attacking villager without killing him.[3] Thomas was also capable of having a high pain threshold in enduring severe torture from his Templar enemies without revealing any information.[4] In terms of equipment, he possessed a Hidden Blade, concealed underneath his sleeve, as well as a sword and dual pistols.[3]

Stoddard was also excellent in hunting targets or artifacts, and the Templars noted him as a legendary tracker and could take on multiple opponents and used the environment to his advantage [2][1]

A close-up of Stoddard 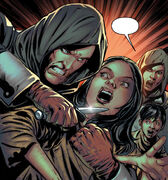