Assassin's Creed Wiki
Register
Don't have an account?
Sign In
Advertisement
in: Articles in need of sources, 1776 deaths, Individuals,
and 10 more

Thomas Hickey (died 1776) was a member of the Colonial Rite of the Templar Order. He served as a soldier in the British Army during the French and Indian War, but he later joined the Continental Army during the American Revolutionary War.

Hickey was an Irish-born soldier in the British Army. He came over to Colonial America in 1752 and was stationed in Boston. There, he was assigned as an assistant to the Templar William Johnson, joining the Order himself. In 1754, the French and Indian War began, during which Hickey served under Johnson's command.

"Don't need no expidittin' - don't need none of your fancy London-speak, neither."
―Hickey to Haytham.

Hickey and Johnson were recruited by Haytham Kenway in his mission to find the mysterious precursor site; however, Hickey's spies were unable to find any leads, so Johnson sent Hickey to retrieve his stolen research on the Kanien'kehá:ka nation. Following Johnson's orders, Hickey tracked the research to a compound occupied by bandits.

Haytham and Charles Lee arrived soon after, and the trio attacked the bandits, entered the compound and successfully retrieved the research, returning it to Johnson at the Green Dragon Tavern.

Soon after, Johnson and Haytham concluded that they would need to befriend the Kanien'kehá:ka in order to gain more information on the land, to which Hickey suggested that they kill Silas Thatcher, who had been enslaving Kanien'kehá:ka people. Haytham and Lee gathered the remaining recruits, Benjamin Church and John Pitcairn, and with everyone assembled at the tavern, Haytham proposed a plan to infiltrate Southgate Fort.

Hickey and the others proceeded to ambush a slave cart, killing the escorts, and then disguising themselves in the men's uniforms to take their place in delivering the cart to the fort. Inside, Haytham stealthily freed the slaves while Hickey and the others integrated themselves amongst the British forces, however this caused Silas to raise the alarm. In response, Hickey and the others triggered a battle, fending off the soldiers while Haytham and Church killed Silas, allowing them to free the remaining slaves.

A year later, Haytham had been in contact with a Kanien'kehá:ka woman, Kaniehtí:io, and the two formulated a plan to kill General Edward Braddock. Hickey assisted in the attack of Braddock's expedition, allowing Haytham to kill the former Templar. After discovering the precursor site and discovering it to be a lost cause, Haytham changed the overall plan for the Colonial Templars to focus on establishing a permanent base in America, as well as expanding power and influence throughout the colonies.

Over the next several years, Hickey maintained a low profile, leading an underground black market for the Templars, primarily focusing on forging counterfeit money and providing information through espionage. As the American Revolutionary War began, Hickey left the British Army and joined the Continentals, where he was stationed in the Connecticut militia as an officer.

"Ain't s'pposed to be none of your kind left. Suppose I'd best be rectifyin' that, then."
―Hickey to Connor.

In 1776, Hickey was given orders by Haytham to murder George Washington, Commander-in-Chief of the Continental Army, in order to replace him with Charles Lee, so Hickey joined Washington's private guard during the latter's campaign to take New York from the British.

The Assassin Connor discovered this plot after killing John Pitcairn, and learned from Benjamin Tallmadge of Hickey's counterfeit ring in New York. Connor then traveled to New York and tailed one of Hickey's subordinates to a hideout. There, Hickey recognized Connor as an Assassin and fled, though Connor eventually caught up with Hickey, tackling him to the ground. Despite this, both of them were soon arrested and imprisoned at Bridewell Prison for counterfeiting.

In Bridewell, Hickey was approached by Haytham and Lee, who reprimanded him for his recklessness. They then informed him that they could not pardon his release due to the investigation against him by Tallmadge. Instead, Hickey was moved to a more comfortable and private cell.

Connor was later able to steal the prison warden's key with the assistance of Mason Weems and went to kill Hickey in his cell, only to find the murdered body of the warden. Suddenly, the Assassin was ambushed by both Hickey and Lee, who revealed to Connor that he would be trialed and executed for the murder of the warden and also for attempting to assassinate Washington. Lee's plan not only framed Connor but allowed Hickey an opportunity to murder Washington, who would personally attend the execution.

"Ya just had to be an hero, didn't ya? You and Georgie both. Now you'll see what it gets ya: a pine box and li'l else."
―Hickey to Connor.

Hickey escorted Connor to the gallows after Haytham and Lee omitted the supposed trial. While being hanged, Connor was rescued by the aid of the Assassins, forcing Hickey to make a desperate attempt to kill Washington as he rushed through the crowd. However, as Hickey attacked Washington's bodyguards, Connor was able to catch up and deliver a fatal strike with his tomahawk.

As Hickey died, Connor demanded answers regarding the Templars' plans, however Hickey revealed nothing with his final words and only mocked Connor. With Hickey's death and intent to kill Washington exposed, Connor was able to prove his innocence, through the assistance of Israel Putnam.

"You're just some blind fool who's always chasin' butterflies. Whereas I'm the type of guy who likes to have a beer in one hand and a titty in the other. Thing is, boy, I can have what I seek. Had it, even. You? Your hands will always be empty."
―Hickey criticizing Connor's motives, 1776.[src]

Hickey was a slack, self indulgent and lecherous man, who often lazed about in taverns, excessively drank alcohol and enjoyed the company of women. Hickey took his orders and duties lightly, hence he was often reprimanded for his reckless and unprofessional behavior. Hickey was blatant, shameless and arrogant, which was evident by his lazy, improper and disrespectful behavior towards even his superiors and his enjoyment in mocking and belittling Connor.

Hickey had very little care and commitment to the Templars' vision of a New World Order, and instead served only for a means of personal profit as he believed there was nothing else to live for. As a result, similar to Juan Borgia, Hickey died with little to no regret, content that he had already fulfilled his desires and earthly pleasures, even to the point of being almost nonchalant about the fact that he was about to die.

Nevertheless, while he did not show any particular devotion to the Templar ideals, he also never betrayed their cause as Church did, and even proved willing to make a risky and public attempt on Washington's life with minimal support, in the middle of a hostile crowd. This both led directly to his death, and made it unlikely he would survive had he succeeded.

Thomas Hickey is a historical character in Assassin's Creed III, where he is voiced by Irish actor Allen Leech. 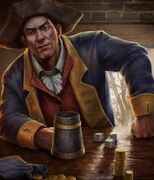 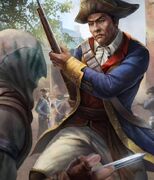